On Thursday, February 22nd, we reached the end of the Southern Tier in San Diego! 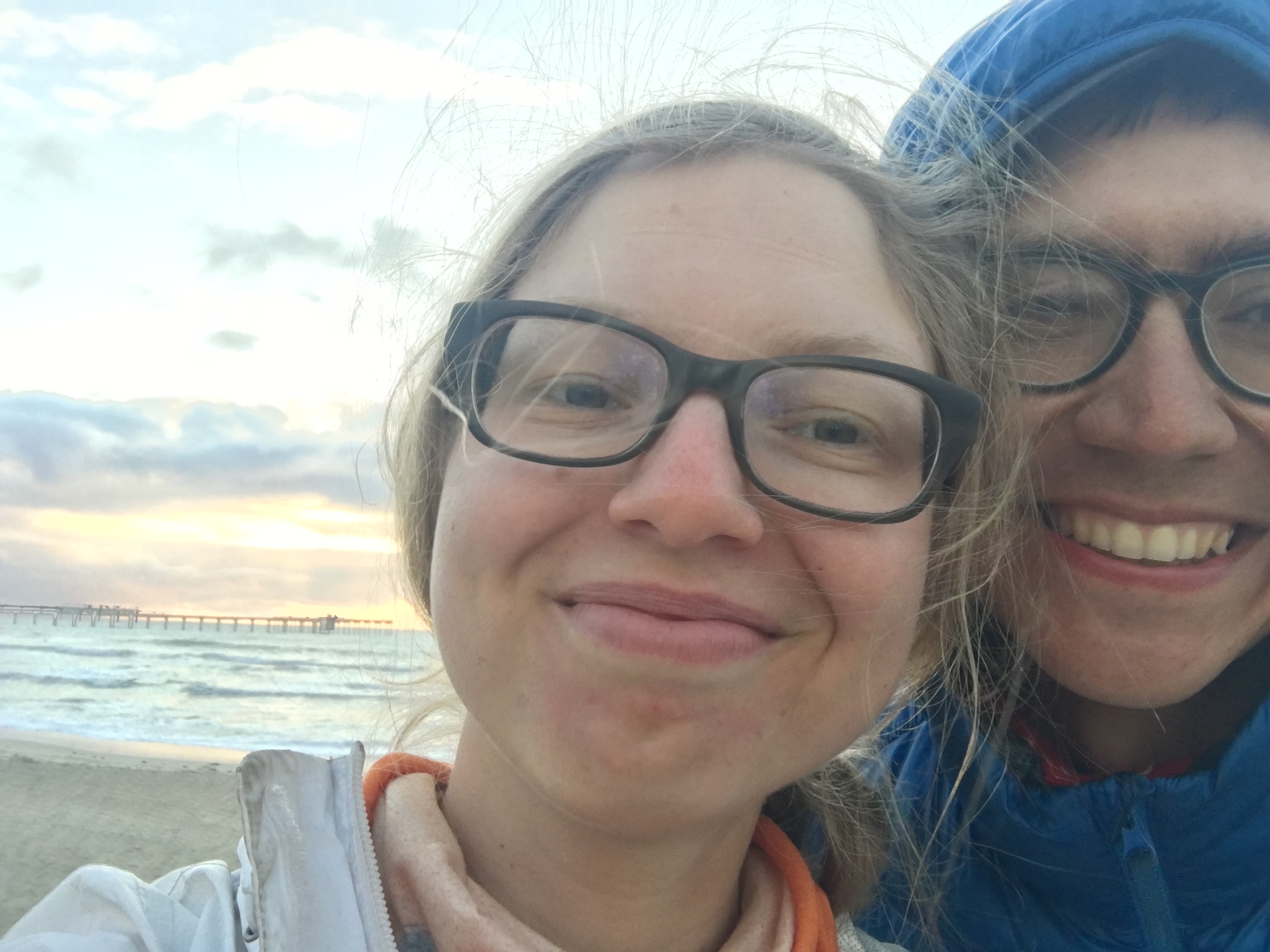 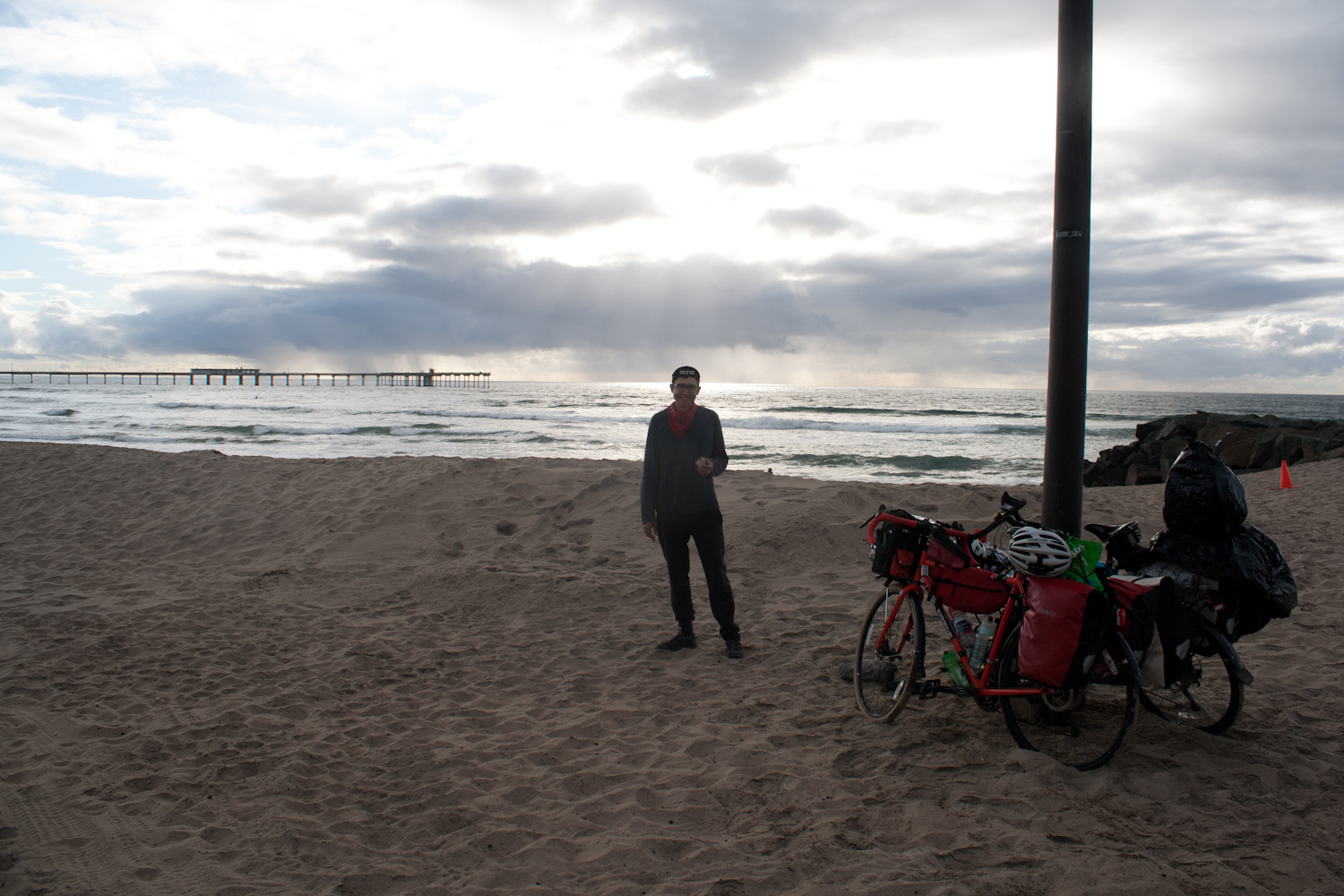 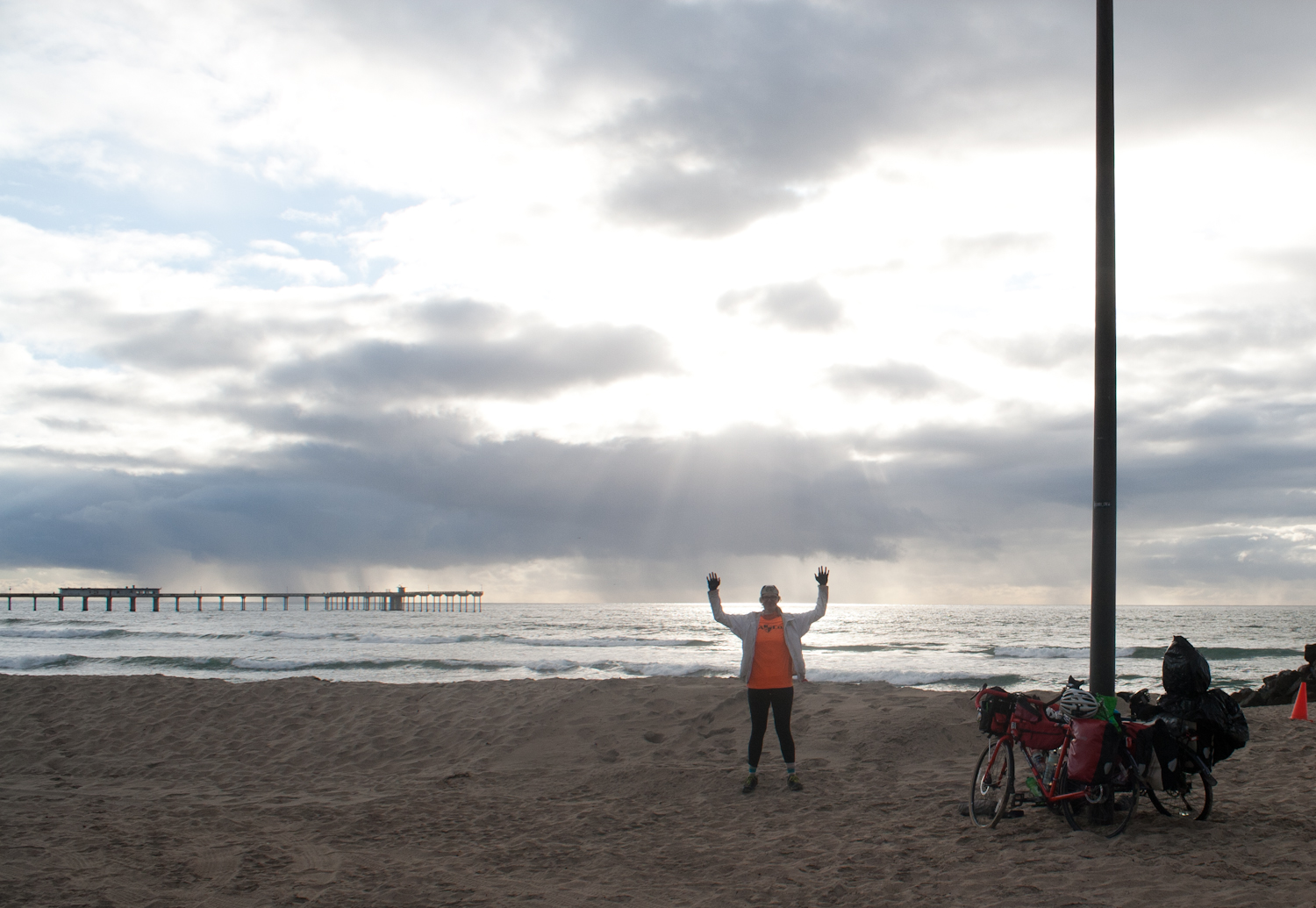 California kept us challenged all the way to the end. We spent two days crossing the Jacumba Mountains, with over 7,000′ of elevation gain, freezing temperatures, and even a little (admittedly mild) hail. In our final approach to San Diego, a stiff wind and cold rain tried to push us backwards, away from the ocean.

The end of our route led us down the Ocean Beach bike path. As we approached, the weather cleared, and suddenly the Pacific opened up in front of us. There was a magnificent sunset behind dark clouds and even a bit of rainbow. It struck me with a lot of finality – this was the end of the road. The ocean provided sufficiently dramatic bookends for such a trip. Seeing water, after all our time in the desert, definitely stirred some emotions: elation, and surprise. 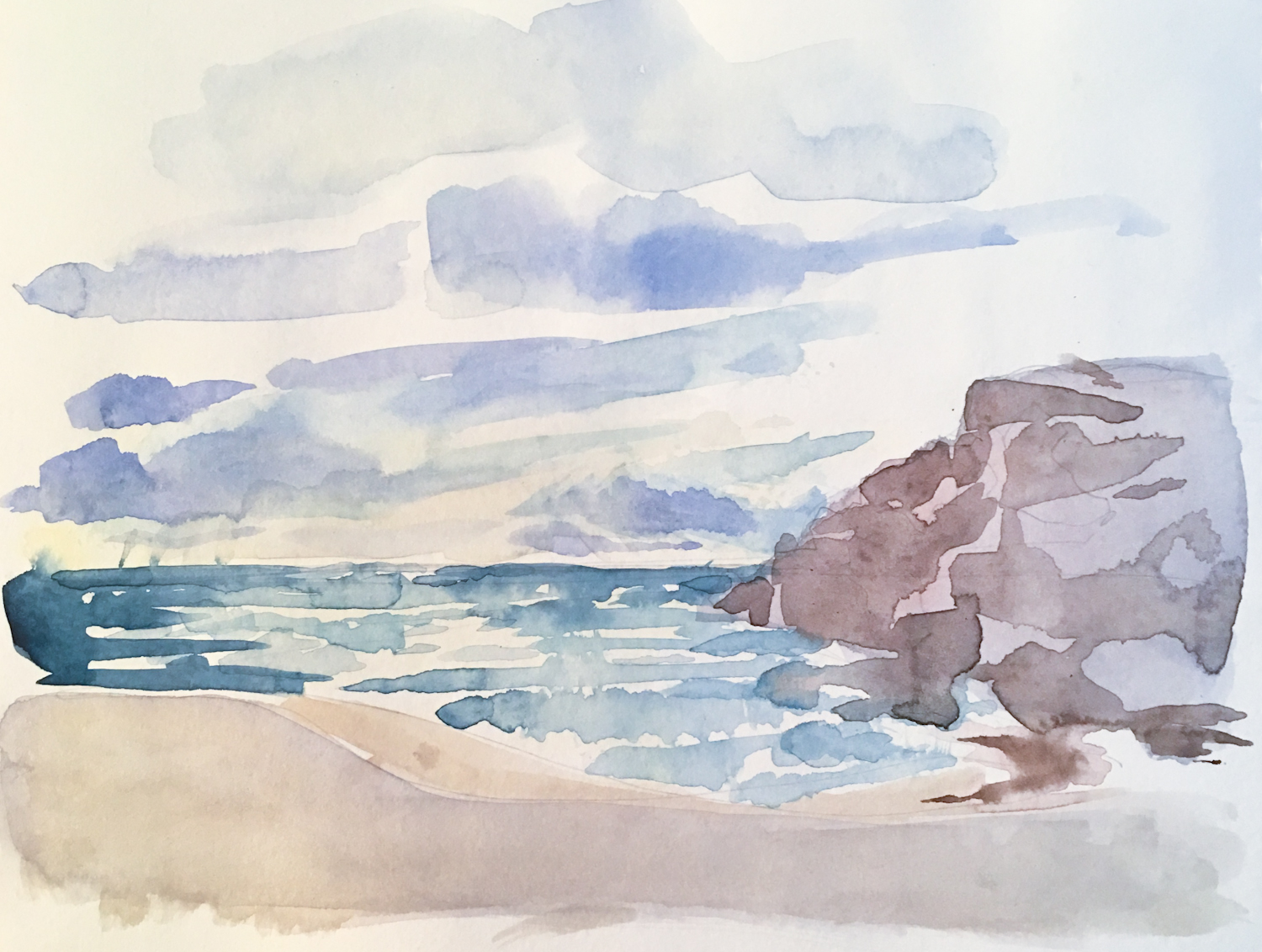 We’re both still processing what this means to us. It was strange to feel directionless after so long: we’ve been simply going “south” or “west” for months. We were very fortunate to have a soft landing in San Diego with Kathleen, the mother of our friend JP.  She took us around the city and her old neighborhood of La Jolla, and spent a lot of time talking with us about our ideas and plans. Through those long conversations, she helped provide the insight that allowed us to move forward past our indecisive haze. 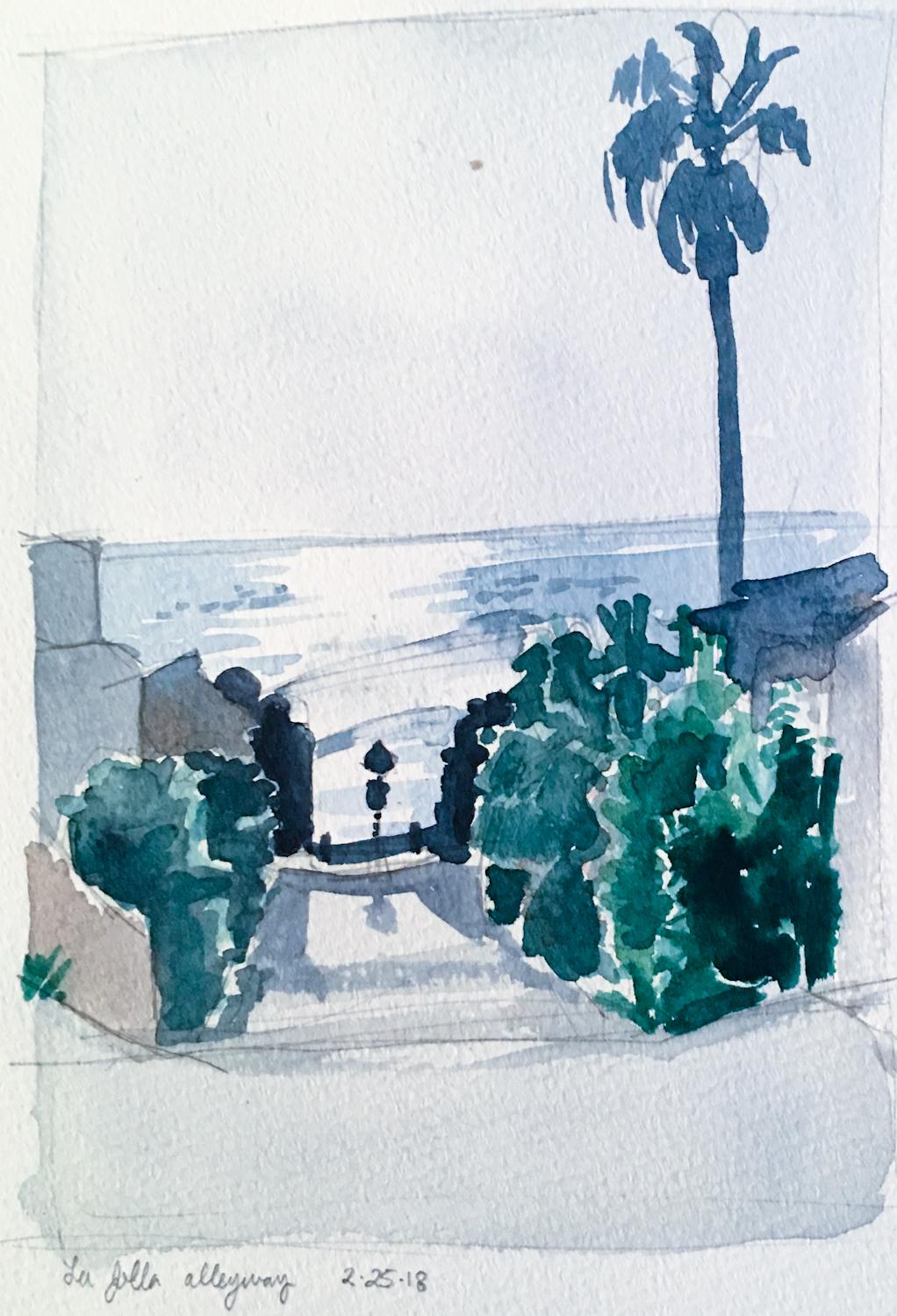 We’ve booked plane tickets to Japan, from Seattle to Tokyo, in late March. This gives us an excuse to travel north and explore the West Coast. We’re planning on stringing together a combination of Amtrak travel and bike touring. Today we’re leaving San Diego and riding a few days north to LA. I’m really looking forward to planning our trip to Japan, as well as seeing everyone we know on this side of the country!

We joked at the beginning of this trip that, like the ship of Theseus, we’d slowly repair our bikes with cheap Walmart parts and ride into San Diego on a pair of Huffys. While that hasn’t quite come to pass, a series of unfortunate mechanical issues have forced us to take several breaks. Jim’s rear tire wore down to the pink inner rubber.  My rear tire developed a large visible hole, which we booted with a dollar bill. We ran out of patches right before my rim tape, old and brittle, began sawing through tubes. Several trips to Walmart later, we now have two weirdly supple replacement rear tires; a wheel lined with ACE bandage tape; and a pile of slightly ill-fitting spare tubes. 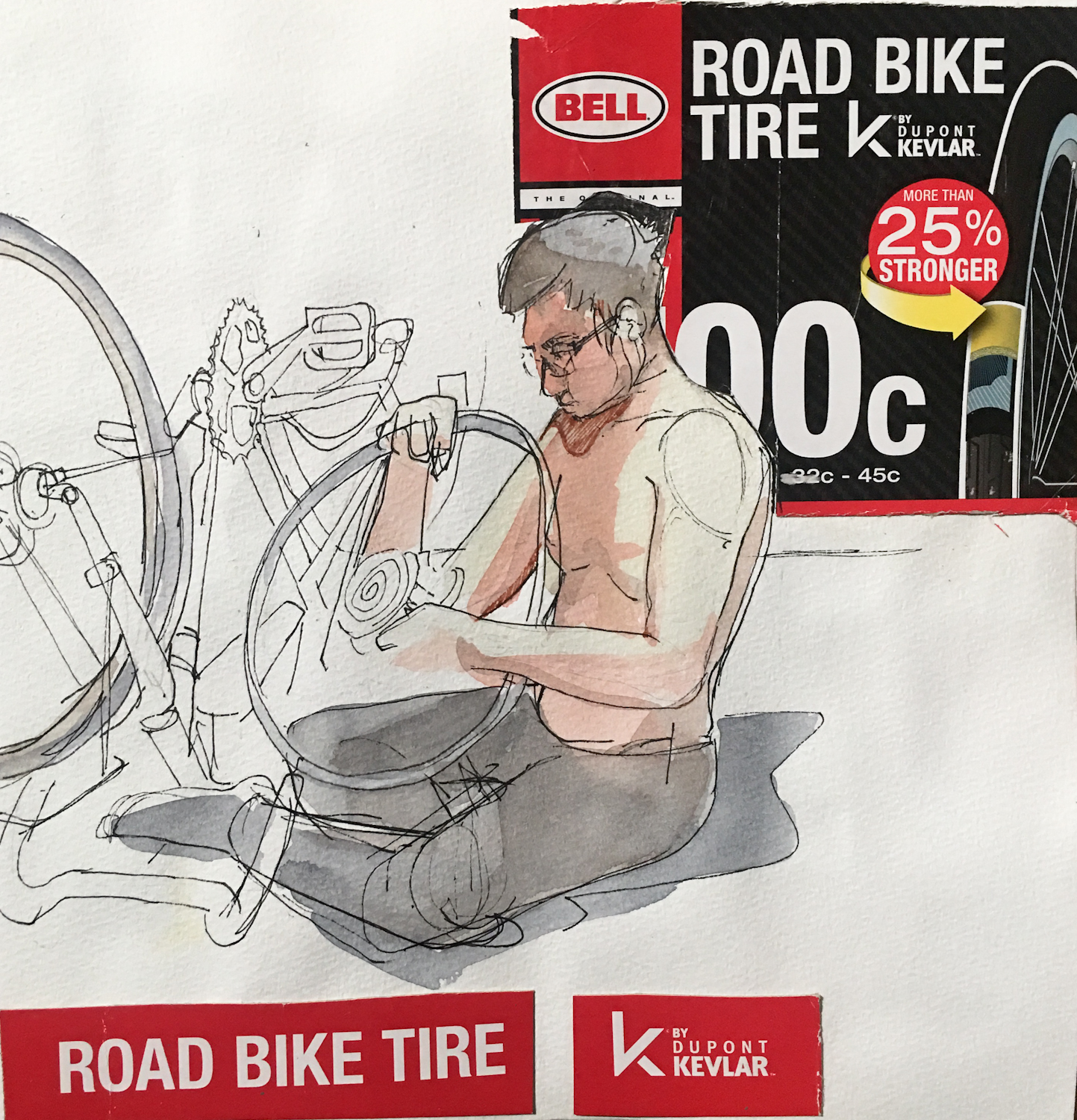 Since we left Phoenix, I’ve been daydreaming how exactly we’d celebrate in San Diego. The first few mechanical issues left me frustrated – each was an obstacle delaying me from my victory burrito on Ocean Beach. But by the third flat, I just started laughing. I realized that anticipation was the wrong state of mind. When you’re trying to get somewhere, every delay is something to be angry about. But if you look at it sideways, it’s still the same trip. How can I be mad that I’m stuck in beautiful Southern California, and I get to dawdle here even more? 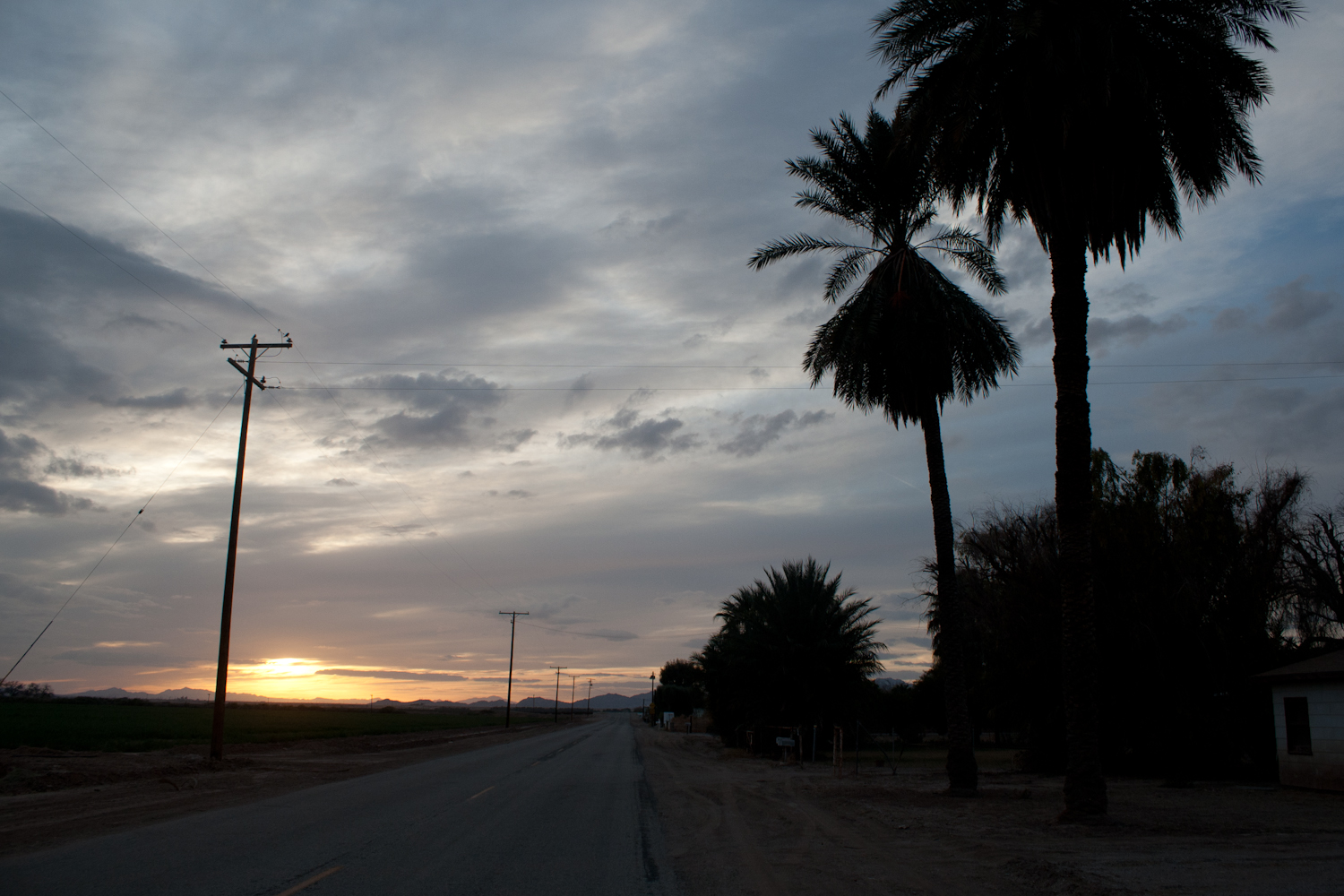 The terrain has been varied, which is a delight to me after a month of repetitive desert. We crossed the Colorado river, passed through farmland, climbed the foothills of the Chocolate Mountains, rode up and down the Algodones dunes, and descended into the Imperial Valley. The first thing I noticed was the smells. A few hundred feet below sea level, the air here is humid, and smells thickly like plants or, less pleasantly, like the cattle feedlots dotting the area. 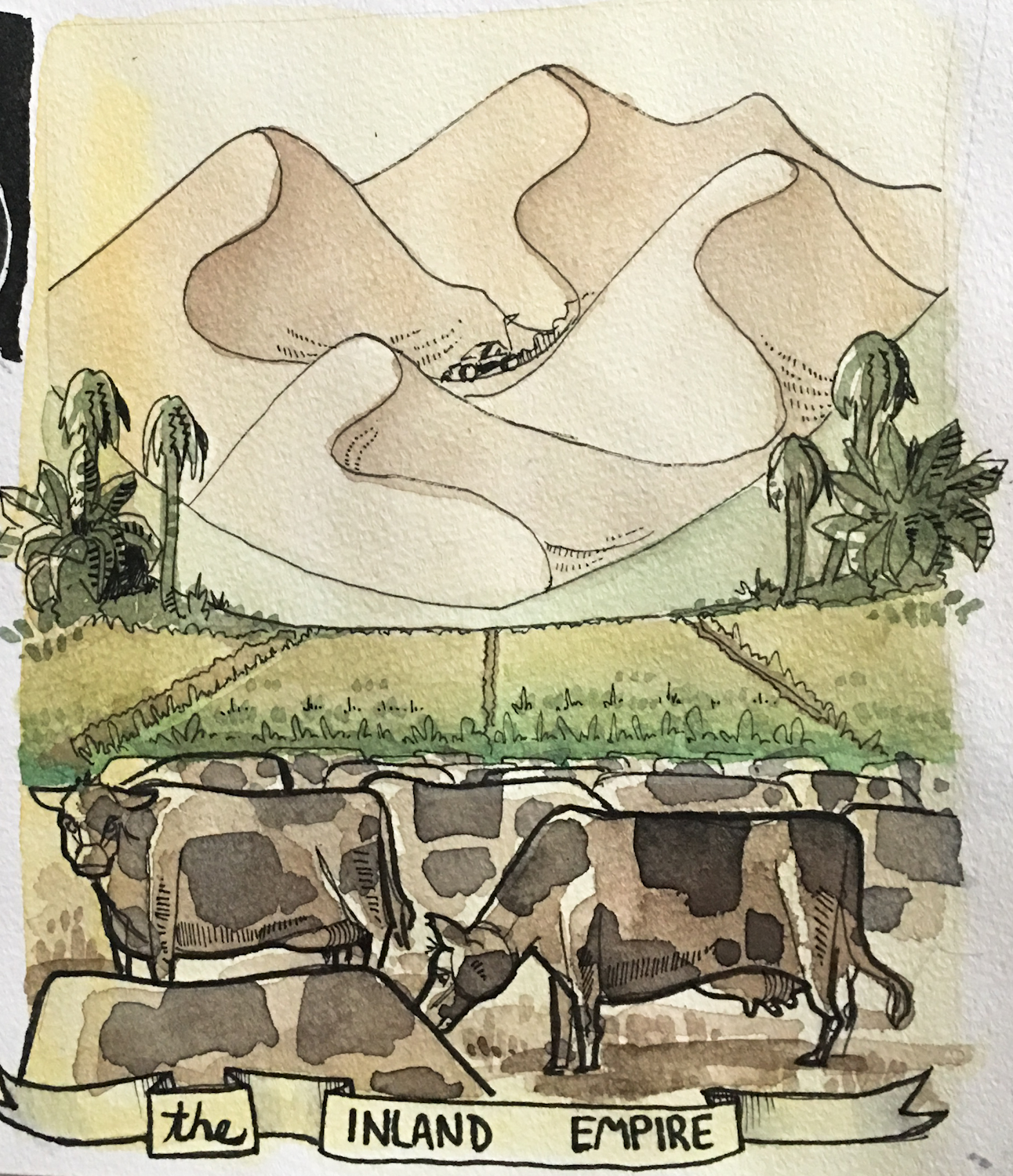 Rural California reminds me more of the rest of rural America than it does of coastal California. I’ve always enjoyed agricultural areas, for the produce, green terrain, and friendly people. We enjoyed a rollicking stay in Blythe at the B&B Bait Shop, sharing beers and gigantic chili dogs with the regulars and two eastbound cyclists just beginning their ride. 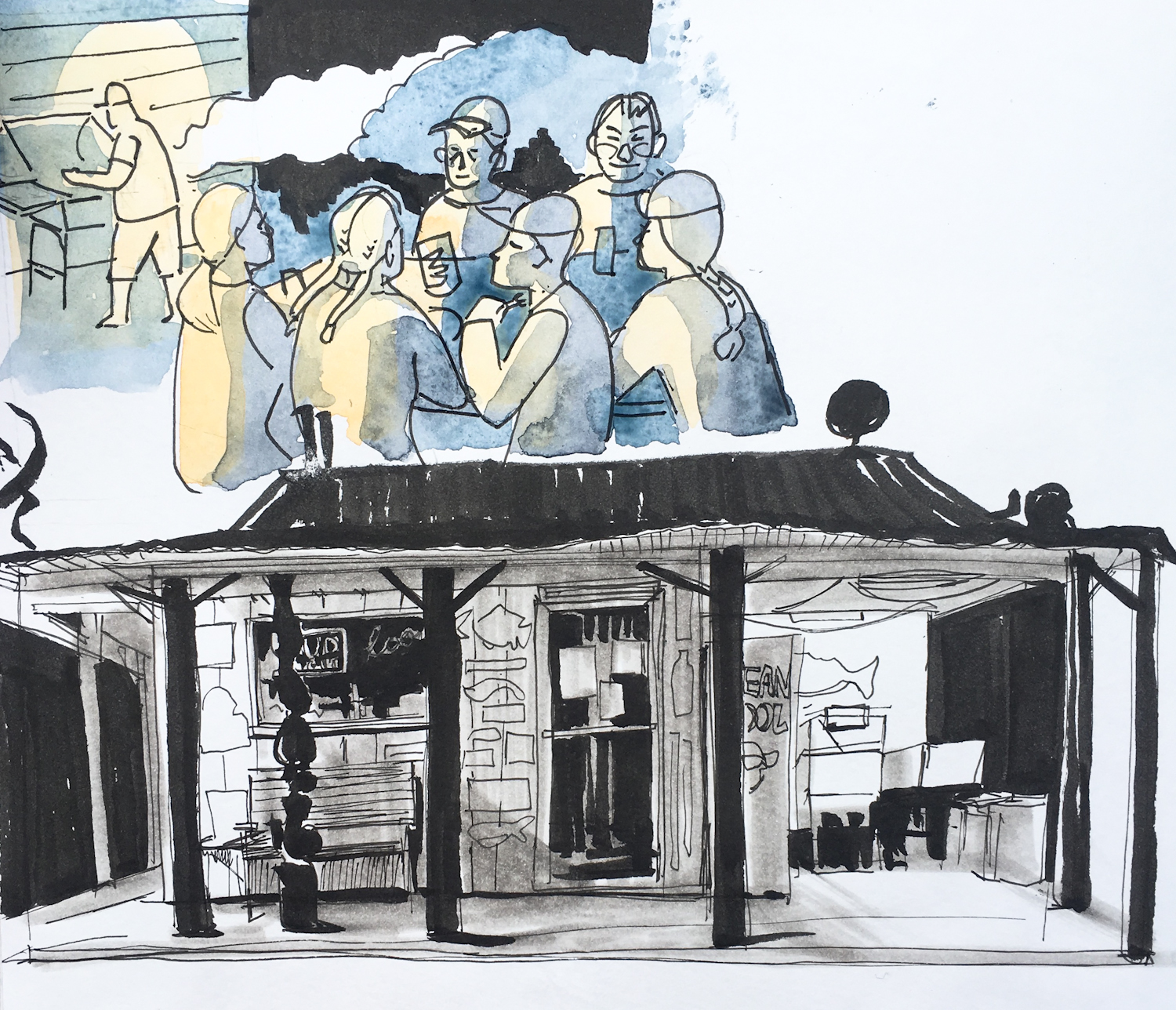 These women had just completed what we’re facing: the big climbs between the Imperial Valley and San Diego. Meeting them made me reflect on how we must have changed over the course of this trip. I feel more relaxed – certainly I’m less upset by our bike issues than I might have been five months ago. I wonder if we’ll be changed at all by reaching San Diego, which has been a distant goal for so long. 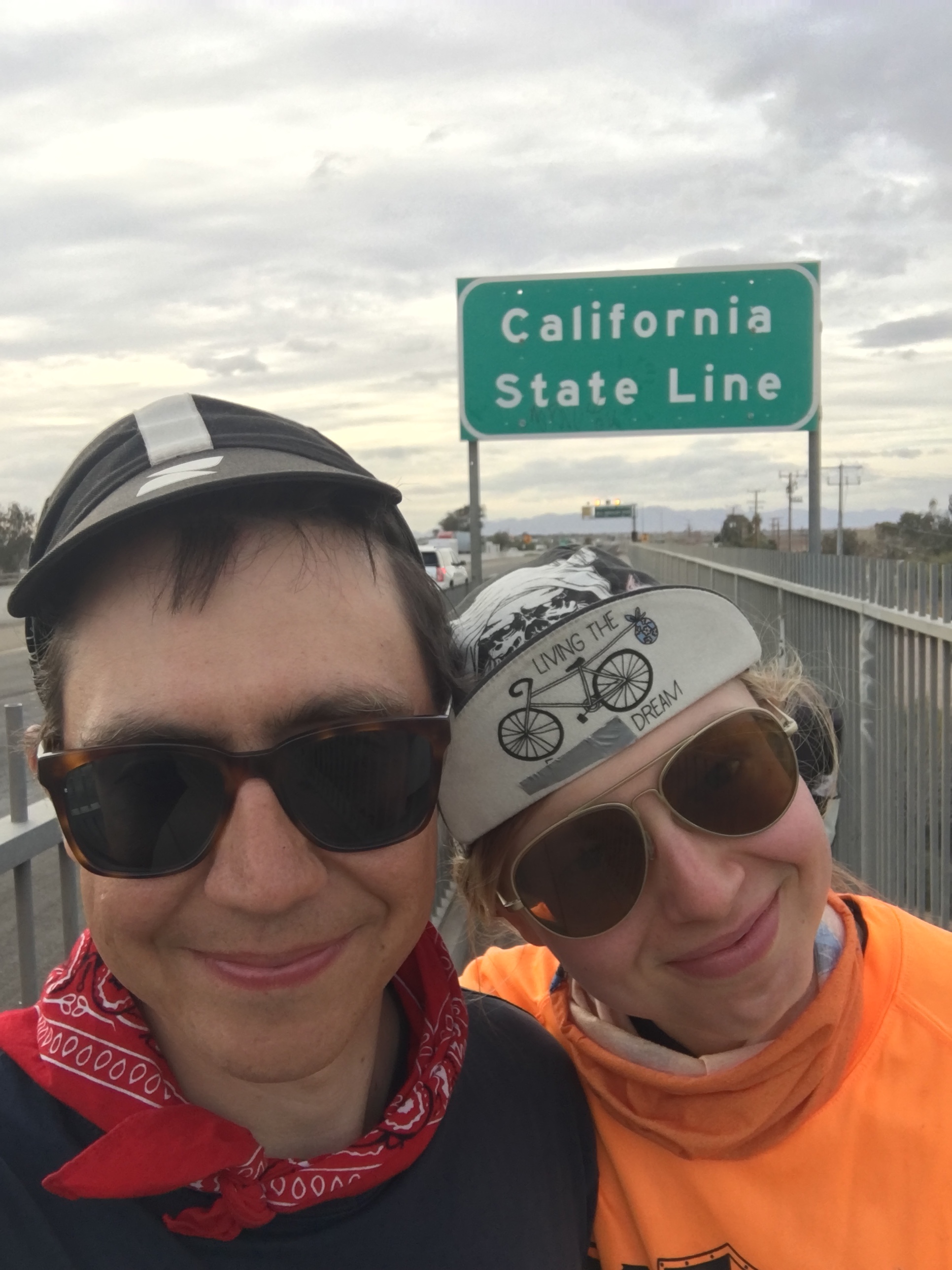 We see many different small towns, but I’m always surprised that one can be dying, the next will be healthy, and the third will be hyper-gentrified. I’ve been reading a lot about urban planning lately. First was the classic Death and Life of Great American Cities by Jane Jacobs. Phoenix exemplified what she calls a “smeared” city. Phoenix, and its many suburbs, form a gigantic, low density continuum. It took us three and a half days of riding to clear the subdivisions before we re-entered undeveloped desert. The copy-pasted repetitiveness of Phoenix made it exhausting to ride through. 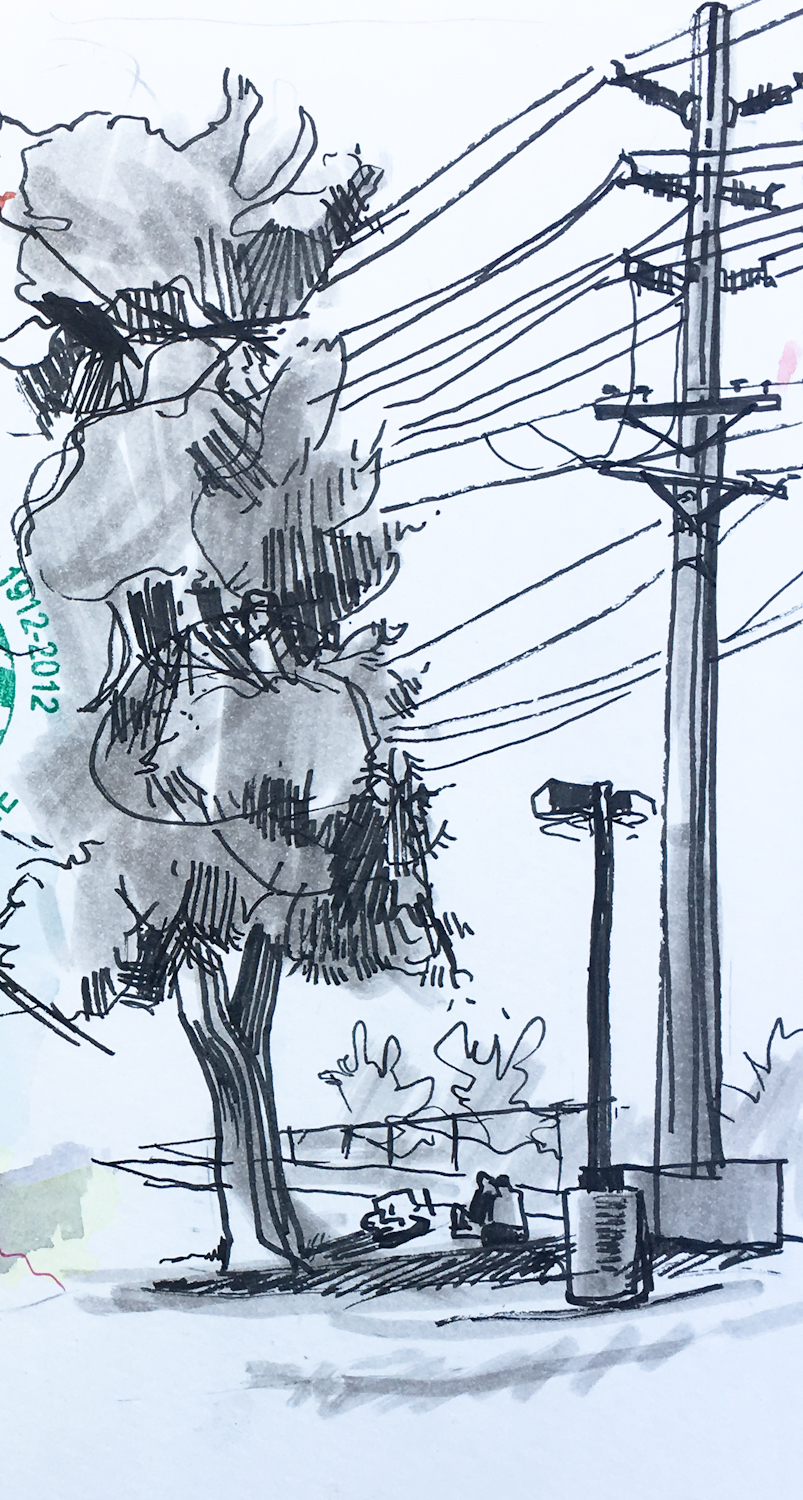 In a magnificent coincidence, my aunt and uncle were visiting Phoenix on business. We took two days off to visit with them, including a day trip up to Sedona, where we saw the famous red rock region. It was nice to take a break and be chauffeured for a change. On our last night together, we ended up eating at Grimaldi’s. There was a funny circularity to it: they had always said to try it in Brooklyn, but somehow we end up  together at a sublicensed “Grimaldi’s” across the country. 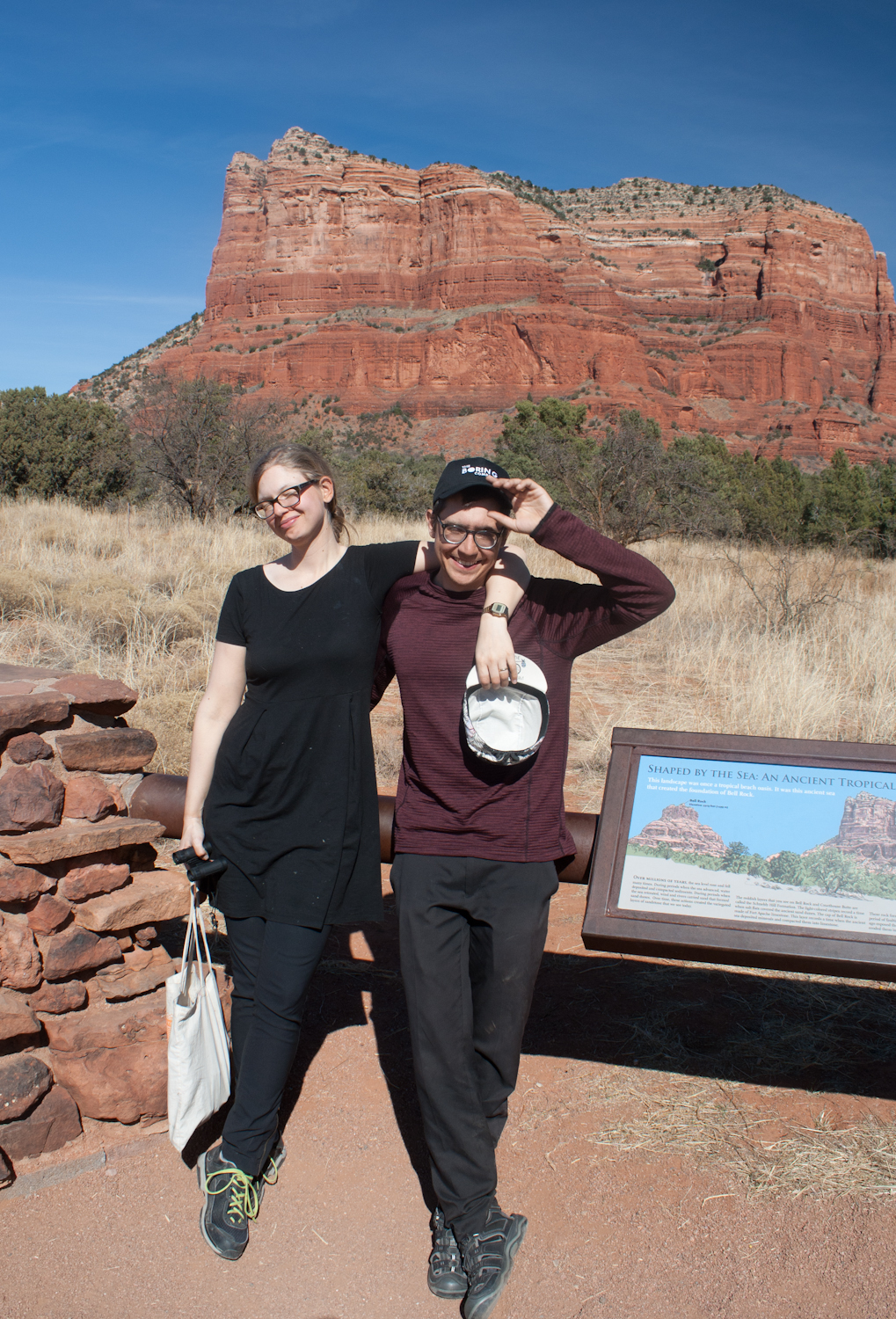 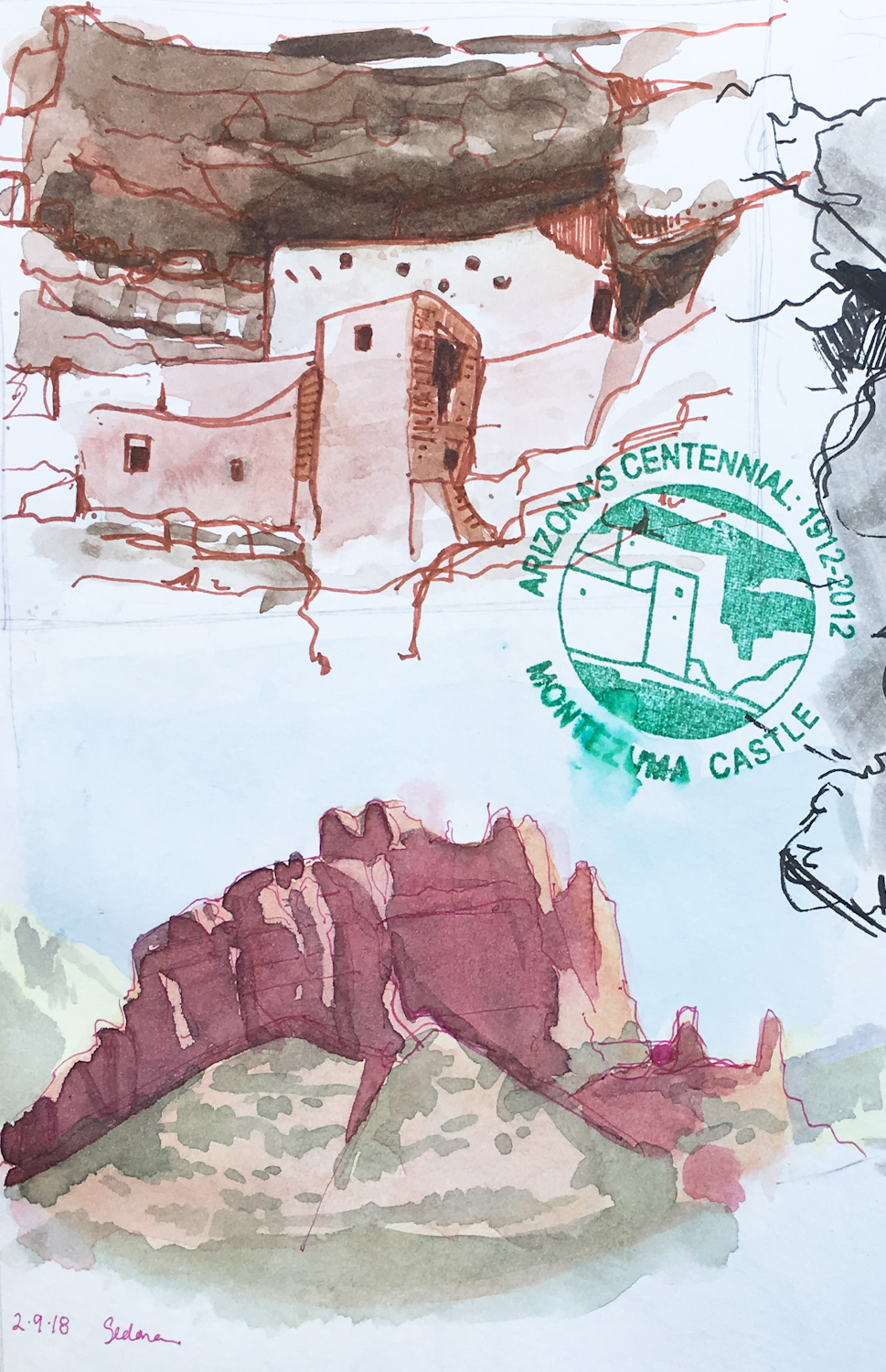 Well fed and rested, for the last few days we’ve been on a tear across the remainder of Arizona. We spent a night in Aguila with Phyllis and Randy, generous Warmshowers hosts whose lifestyle was an interesting rebuttal to the golf-centric 55+ communities of Phoenix. They lived in a community for retired pilots, where every house had a hangar and the main street is a runway. Jim and I both were mesmerized hearing about the technicalities and thrills of glider piloting.

Otherwise, the southwest is beautiful, but I’m bored of staring at creosote and sand. Tomorrow we’ll enter California. I’m looking forward to seeing the Mojave dunes and, of course, the Pacific. 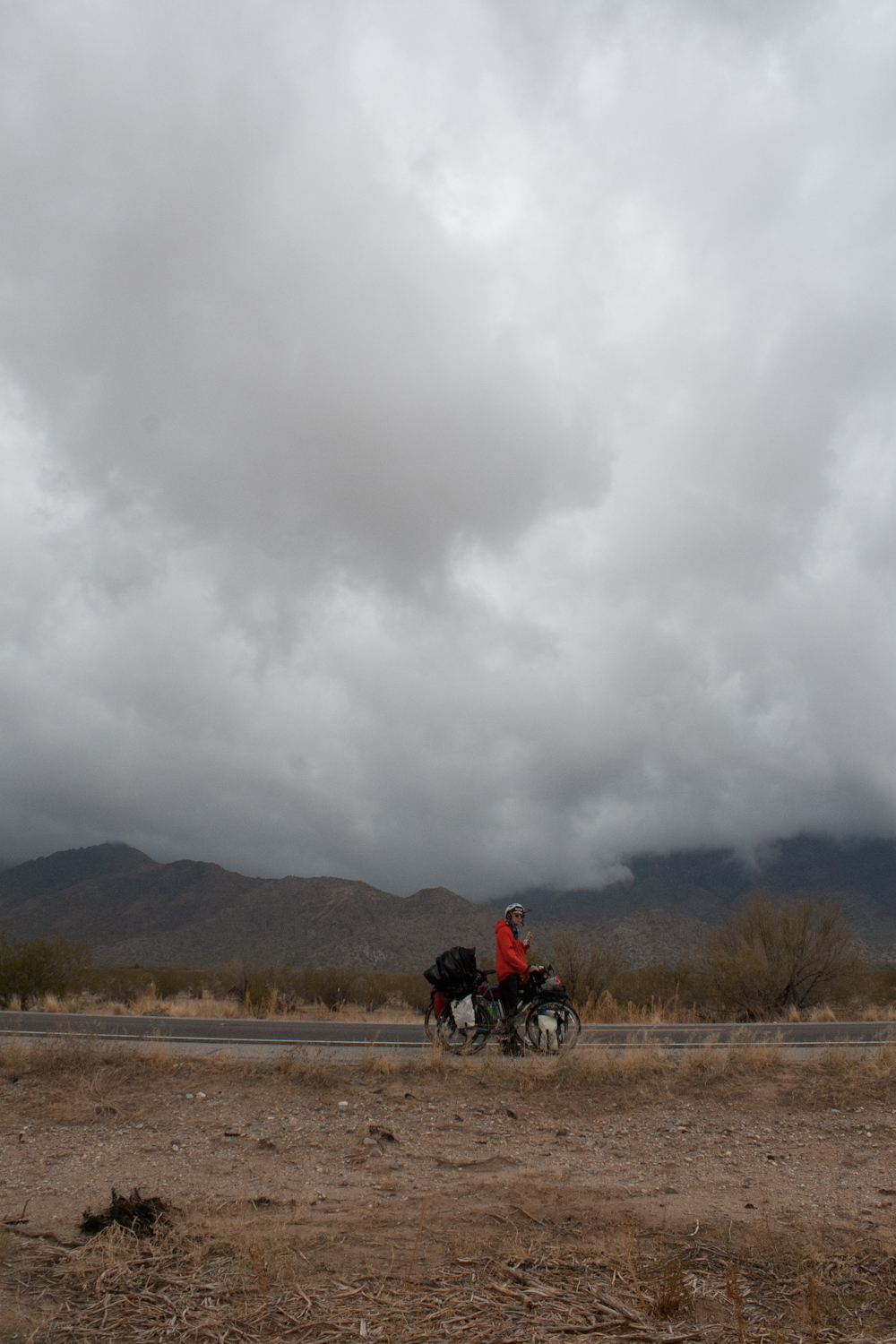 Since our last report we’ve made it over the continental divide and traveled deep into Arizona. We have had the good fortune to stay with old friends as well as meet a few new ones, and to experience some truly amazing terrain. 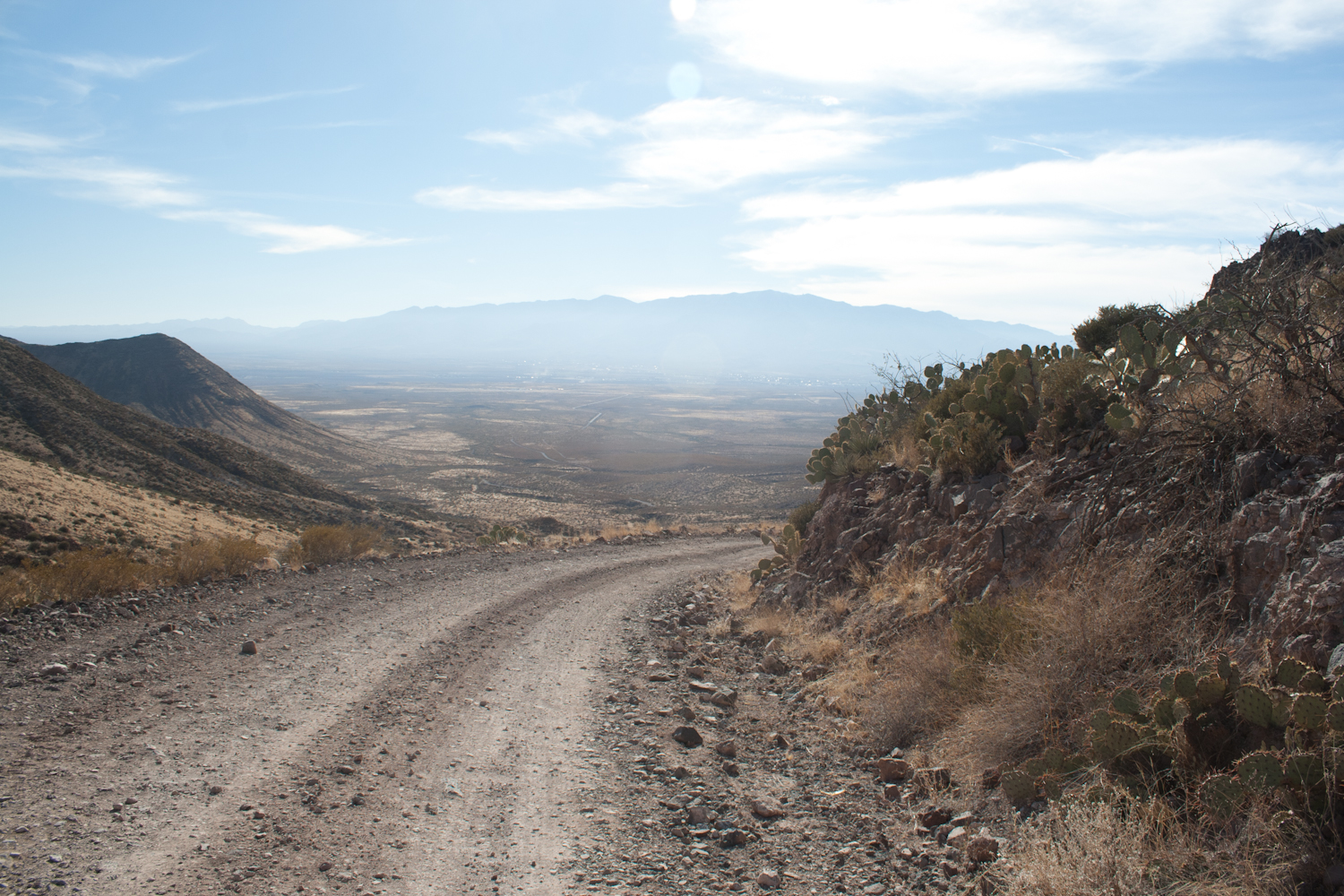 The first town we reached after the mountain pass was Silver City, NM. Silver City was populated by fantastic old hippies. While at a local coffee shop, we encountered a number of people in full costume for an experimental film about recycling set in the distant future. The proper way to tune a Fender amp was being discussed. We met a long distance hiker who used to walk around the desert for up to a week. We stocked up on dried bananas, Turkish figs and fresh-ground peanut butter at the organic food co-op on our way out of town.

After Silver City we climbed up to the continental divide. This was another big geological milestone, equivalent to crossing the Mississippi. After we crossed the divide, we descended several thousand feet in the course of an afternoon. We were able to coast for so long that our legs actually became stiff. The weather became noticeably warmer, too. We’re no longer at significant altitude. 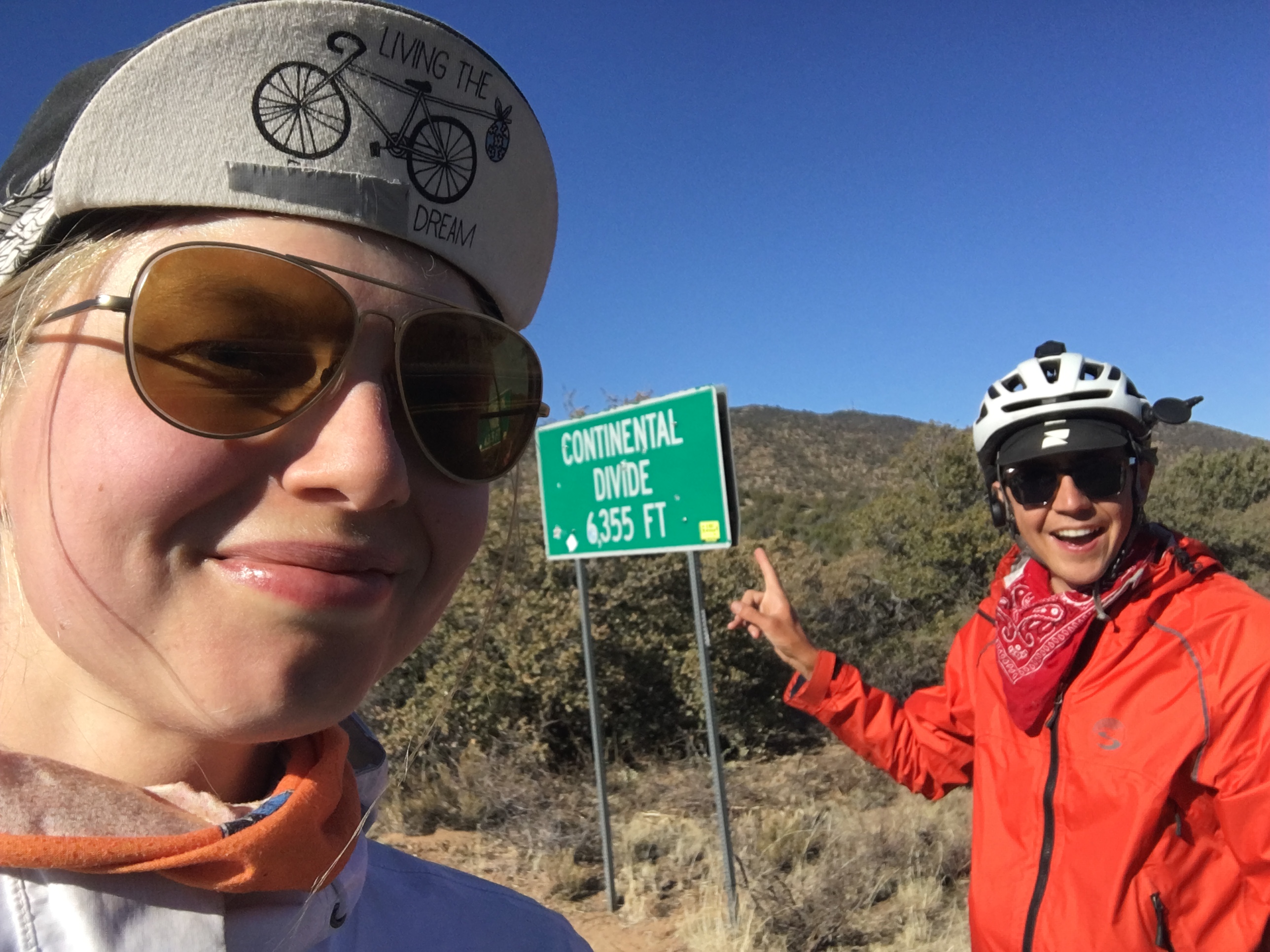 Over the next few days we stayed with two sets of Warmshowers hosts in Arizon. In Duncan, we slept in a teardrop trailer in the backyard of a bed and breakfast, which was shared with a small herd of goats. In Safford, we stayed with two remarkable individuals, Hal and Jay.

Hal is a retired history and educational psychology professor, and great conversationalist. He lived in Egypt back in the 1960s, and his first wife graduated from AUC, the university where my father works. He gave me a biography of Hal Empie – a local artist from the area. The start of the biography had many wonderful descriptions of what life in old Arizona used to be like – wild streams, cows, farming on marginal land in the odd valley that received enough rainfall to be irrigated.   Hal’s friend Jay took us on a tour of the local desert in his truck. He was very familiar with the area as he used to be a desert beekeeper, producing hundreds of barrels of honey every year from the nectar that the bees could harvest from agave, yucca and aloe. We were very impressed with Jay’s driving skills as he drove us into and out of steep desert canyons on washed-out rocky switchbacks. 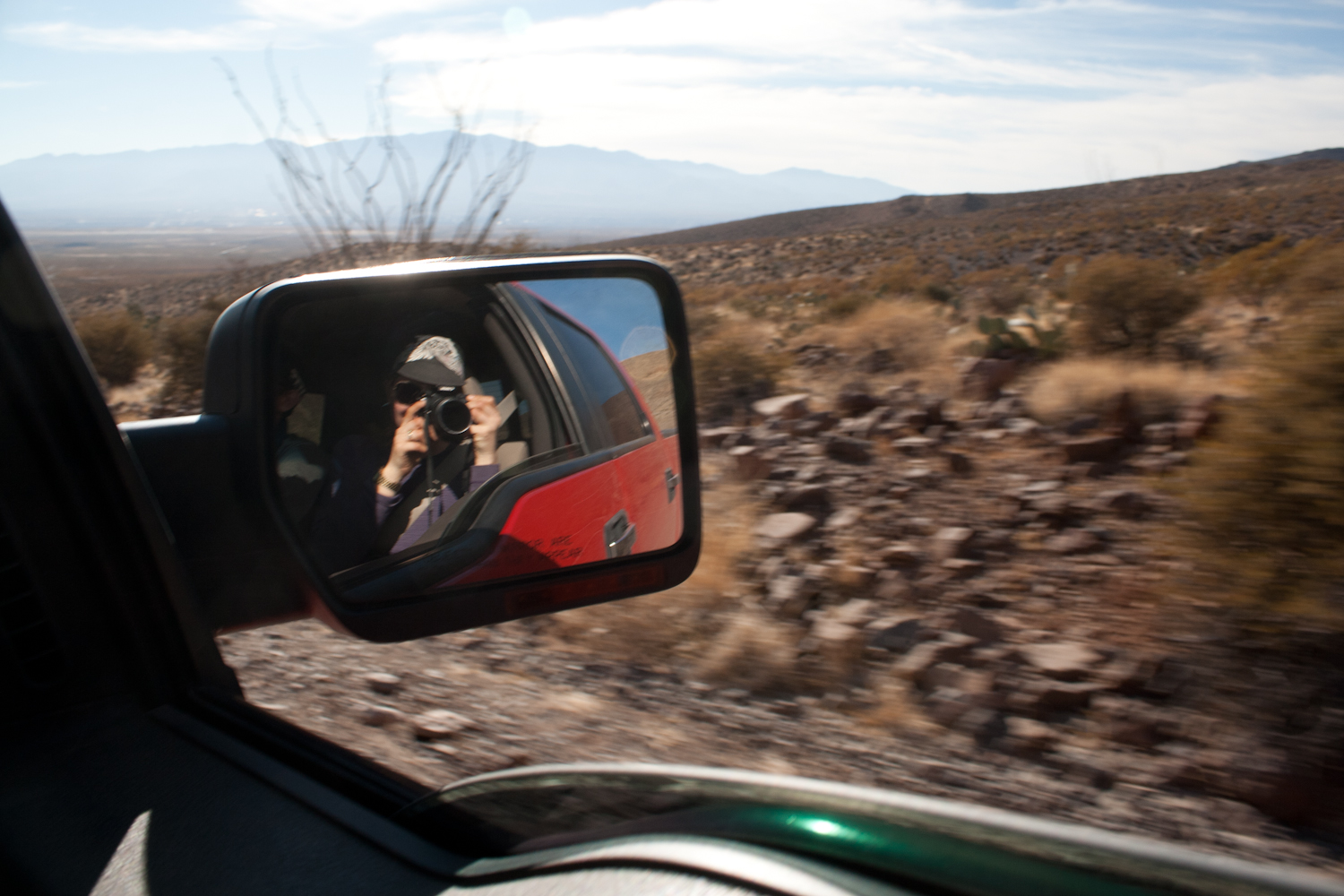 Our college friends Chris and Kira live in Tuscon, so we decided to take a detour off the published Southern Tier route to visit them. We spent a very enjoyable few days playing Dungeons and Dragons, cooking, bowling, and generally enjoying each others’ company, as well as that of their cats and dogs. It was a welcome break to see friends after so long, especially ones who are normally so far away from us.

Tuscon itself was an interesting city to drive through after leaving the predominantly smaller towns and desert agricultural areas. The city was diffuse; spread out  too thinly for bicycling, let alone walking. However, the logic of its design started to make sense while being driven through it. The establishments were placed just far enough apart to cater to a casual driver, and each store had a few locations around town, so that no matter where you lived you didn’t have to drive too far. The map seemed to loop around, repeating itself every few miles, like a a cheap movie backdrop. Calling it ‘suburbia’ would be, I think, incorrect, since it didn’t seem like there was an urban core. It’s more like the entire city has suburban characteristics. 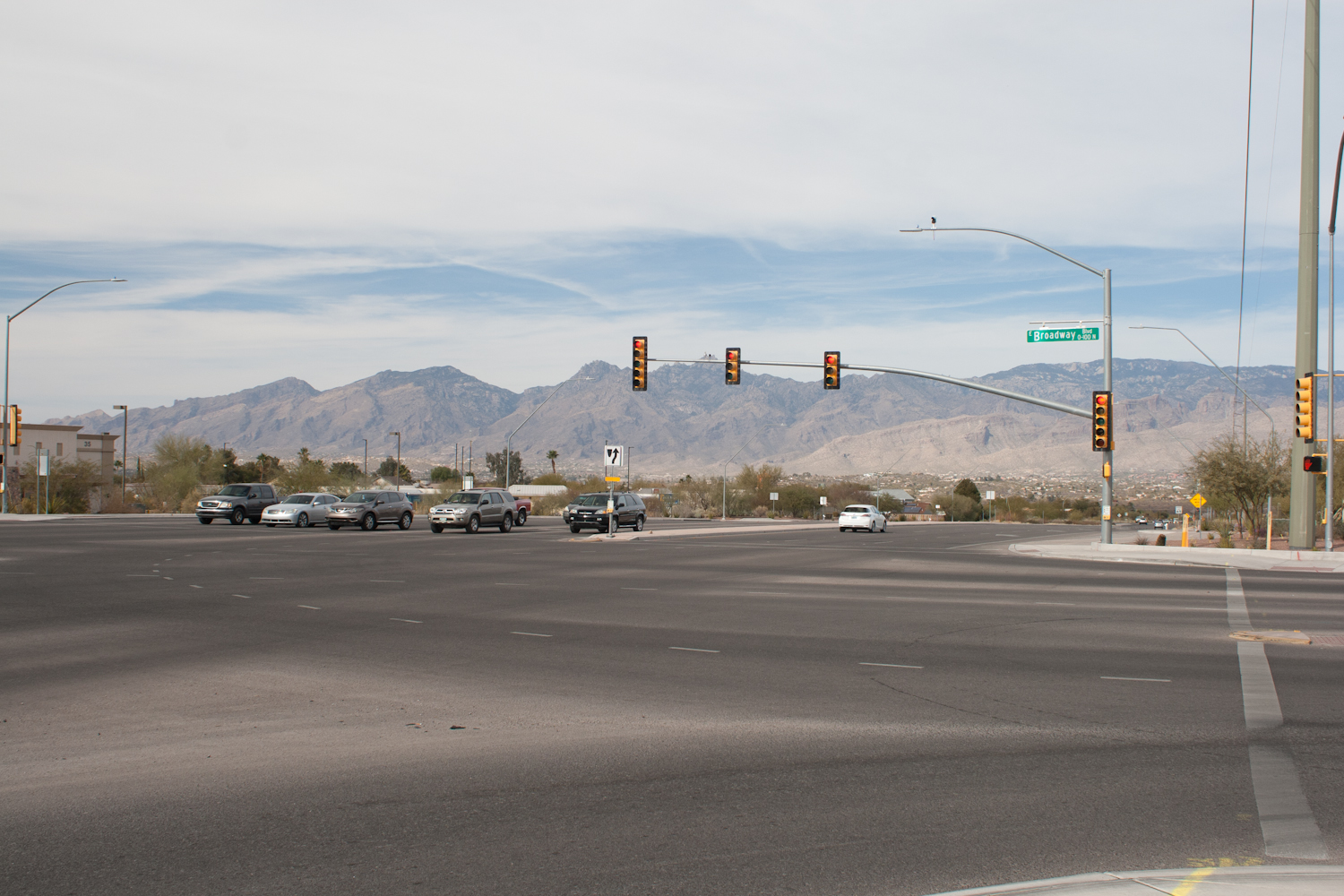 The experience of being in such a constructed space contrasted very strongly with the natural beauty of the desert. It seems almost disrespectful to paper over such an interesting and fragile land with such a prosaic landscape. How much water must this all use! Does there really need to be a city here? At the same time, this is the place that people are from, call their home, and this is the way that their city has evolved.

Chris, Kira, Amy and I took Sunday afternoon to visit Biosphere 2, just to the north of Tuscon. Biosphere 2 is a greenhouse large enough to live in, out of a particular kind of late 20th century futurism. It was strongly featured in many of the science documentaries I used to watch in the late 90s and early 2000s. 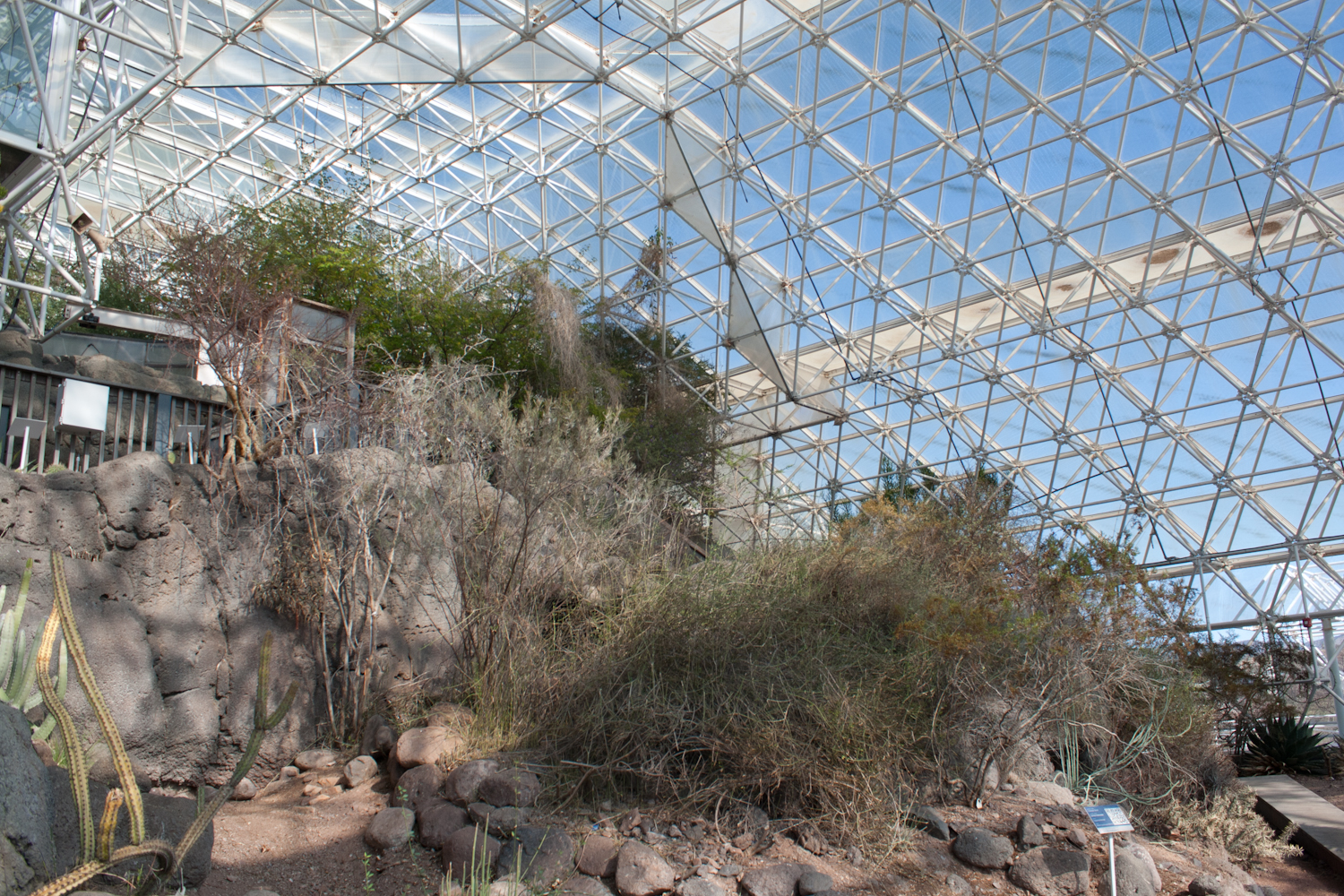 The greenhouse is situated in the same desert as the rest of Arizona, and is designed to be self contained, with the option to be completely shut off from the outside world for years at a time (although it has been open since the early 90s). Beneath the biosphere is the ‘technosphere’, a bay of various pumps, reservoirs and heat exchangers that augment the natural processes in the greenhouse above, including a particularly elegant structure for absorbing the air pressure variations caused by the daily thermal cycle. Perhaps some similar hybrid approach will enable us to build cities in the desert in a more harmonious fashion. 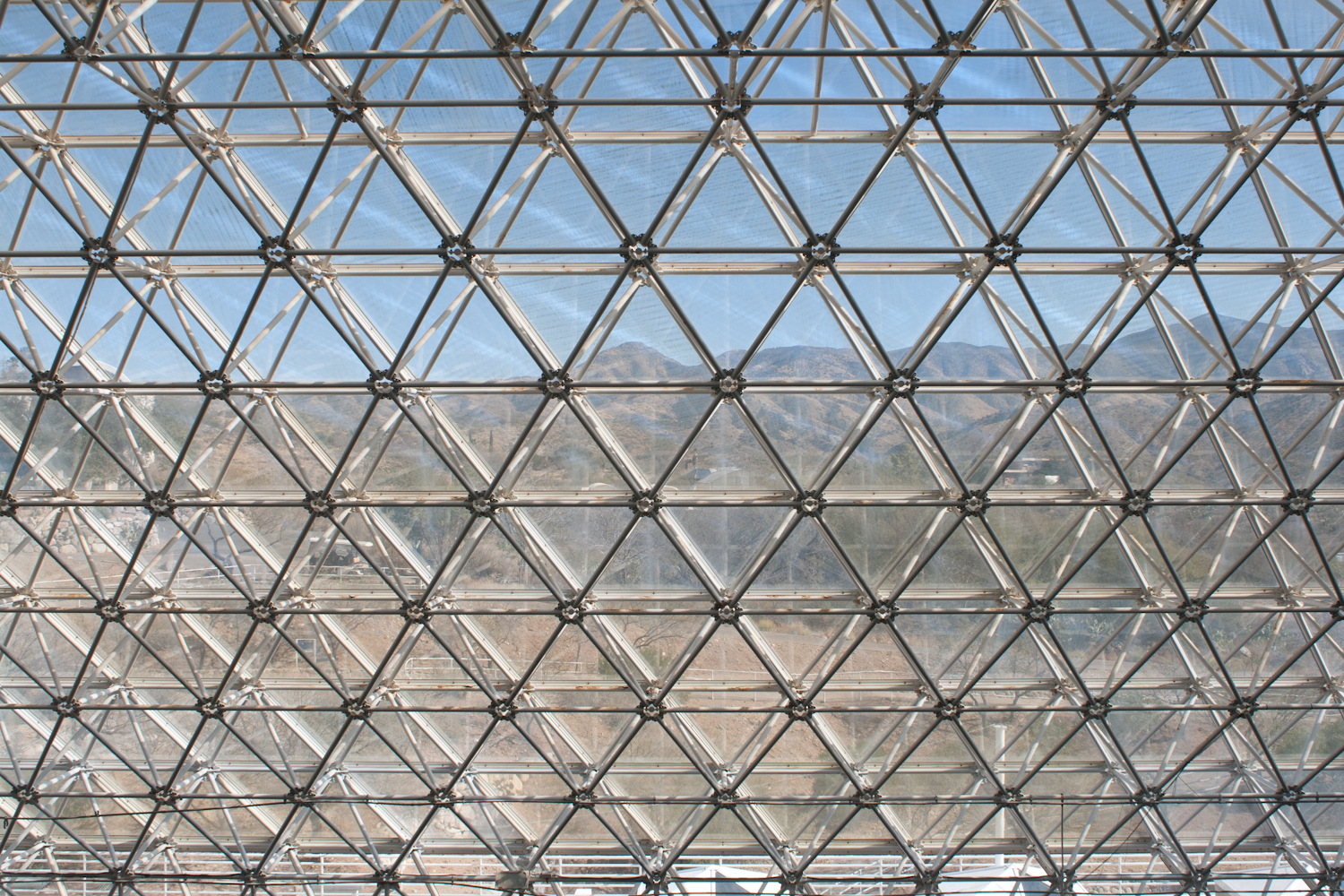 The next major stop for us will be Phoenix, and then onwards into California.

I was expecting cartoon cacti, with two neat, evenly spaced arms. Real saguaros have so much more personality. 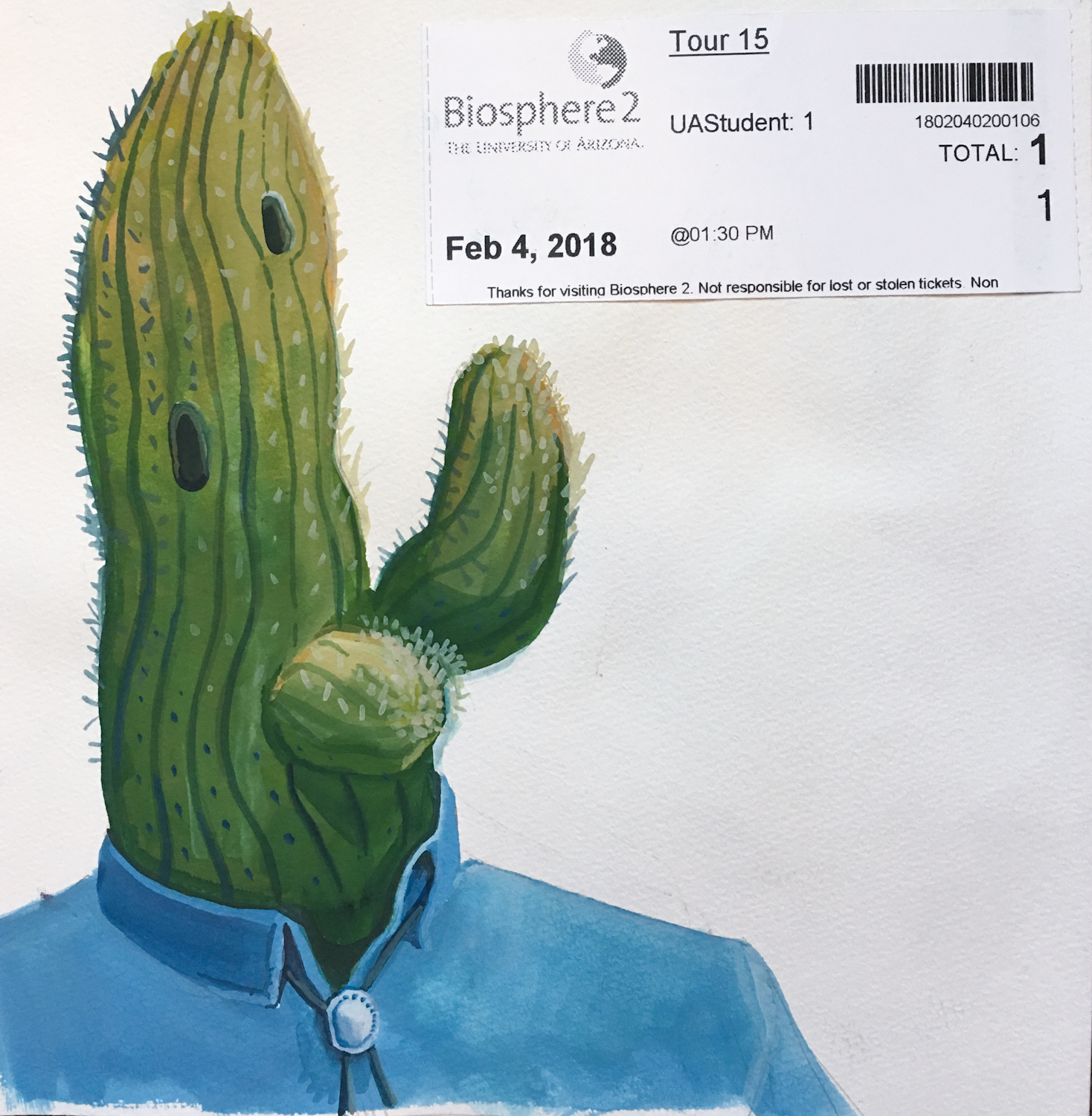 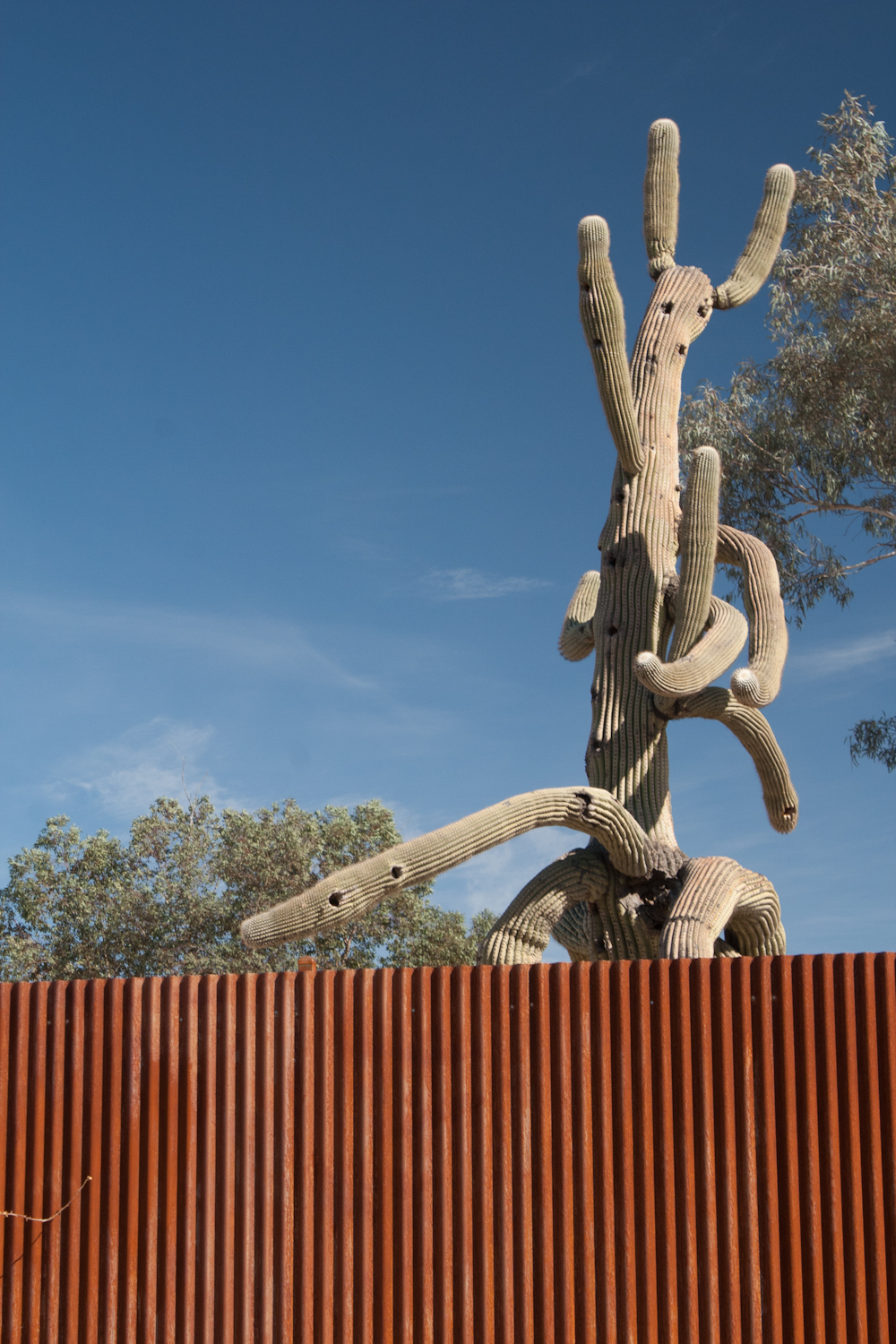 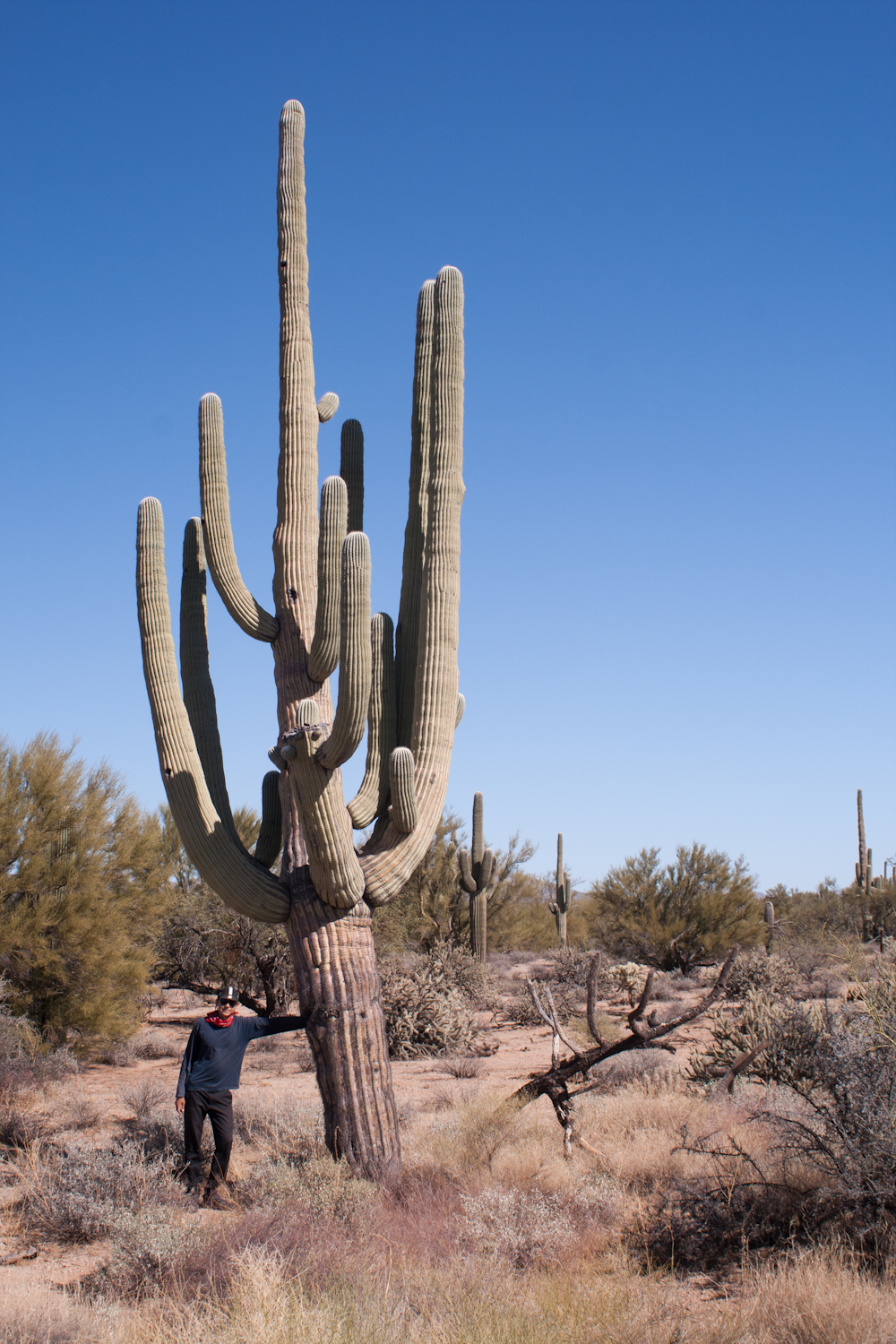 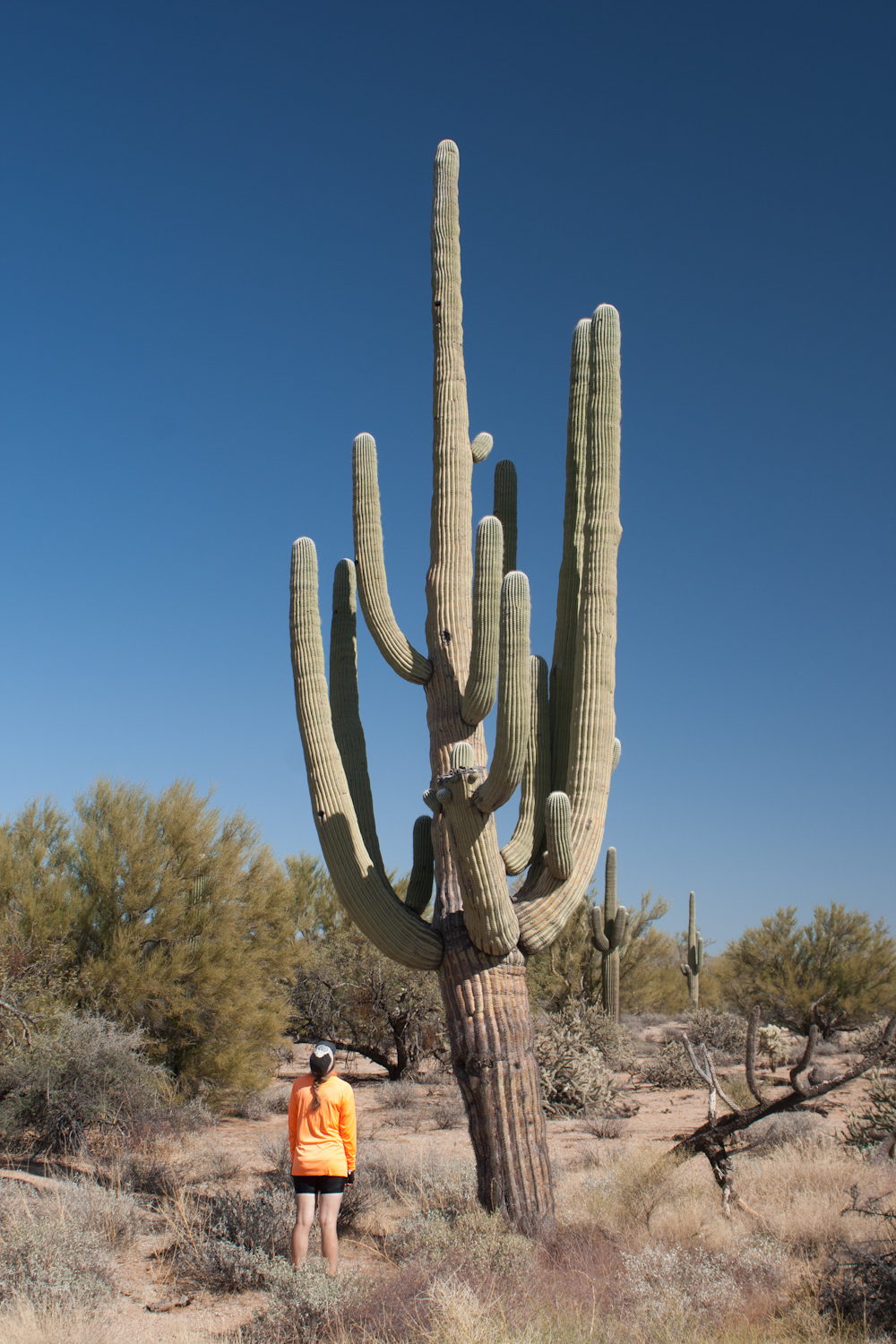