Our first week riding has been an introduction to all the facets of Japan we had hoped for: mountains, hot springs, wonderfully hospitable people, and new kinds of cultural immersion.

We left Tokyo via 413 and rode the Doushi Road up through Yamabushi tunnel, at an elevation of 1150 meters (3700 feet). The ride was just at the edge of my ability – I never had to push, but I definitely spent some very long minutes considering it. It was also a lot of fun, with twisty little roads and foggy green mountain vistas. It was remote and empty enough to be good cycling, but interspersed with villages and an occasional pullout full of vending machines.

We decided to stop for the night in the village of Doushi, two thirds of the way up. But we were a little too early for camping – despite balmy daytime temperatures there was still snow on the ground – so all the campgrounds were closed. We stopped at a convenience store to buy noodles, and we asked the owners for advice. Thus ensued some of the best travel-magic of this trip to date. After a lot of gesturing, Google translate, and a phone call to an English-speaking daughter, we explained our predicament. They made a few calls, found a place nearby that had space for us, and kindly stuffed our gigantic bikes in their tiny Suzuki truck and gave us a lift a little back down the mountain to a ryokan at an onsen. 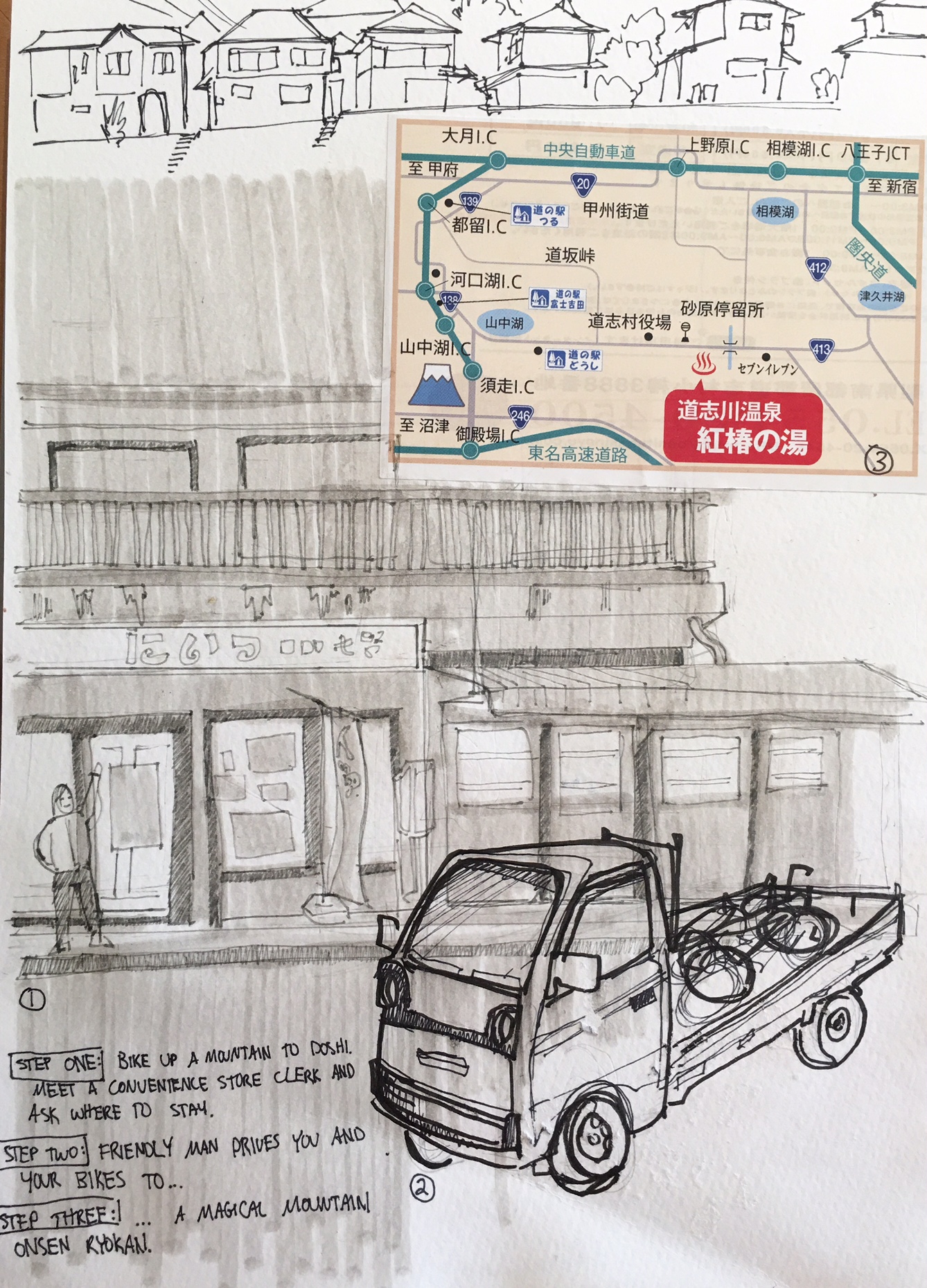 Onsen are one of the things we’ve been looking forward to in Japan: public hot springs, with an attached bathhouse and other amenities. It took about half an hour to get from swampy bike shorts to soaking outdoors while watching the moon. I’ve never felt so clean while touring, and it was restorative to all my mountain-climbing muscles.

I was so nervous about messing up somehow that I found my first onsen experience more thrilling than relaxing. This was also our first stay in a ryokan, with tatami mat floors, sliding paper doors and futons. It meant a lot of fumbling (and googling) on our part to do everything correctly. It’s not that any of the etiquette rules are complex or hard to understand – largely “keep clean things away from dirty things” – but without a shared cultural background, I’m always double-checking that my mental model of “dirty” lines up with that of our hosts. The dance between shoes-slippers-toilet slippers-shoes already seems more natural, but I think it would take much longer to become automatic.

Once we went over the pass, we were treated with a very long downhill ride and stunning views of Mt. Fuji. Fuji dominates the landscape on topographical maps, and it didn’t disappoint in person. It’s a huge, looming presence, and it kept peeking behind trees, train stations and power lines. As we rounded its forested foothills and coasted down towards the sea, we finally got a beautiful full view of Fuji over the countryside. 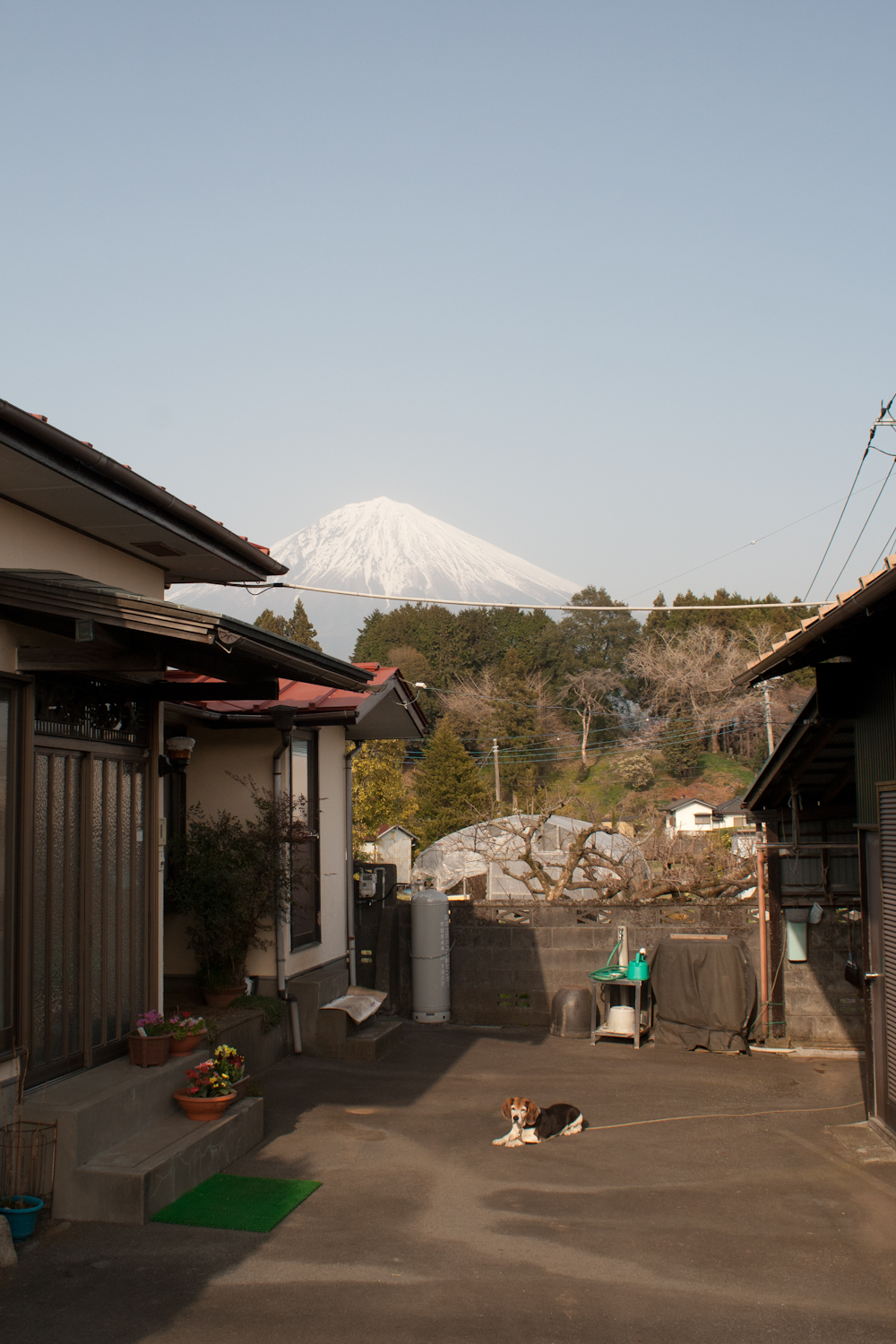 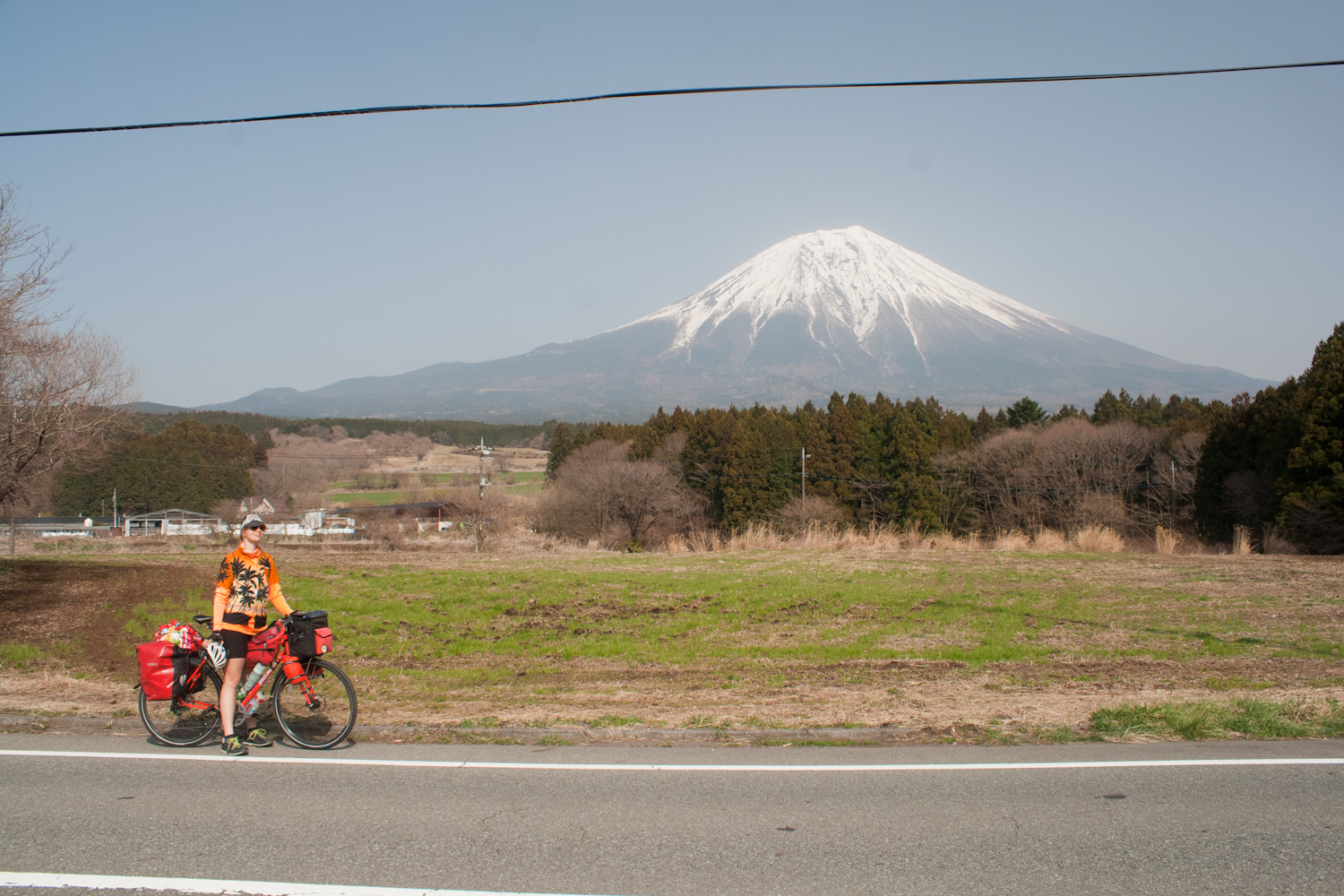 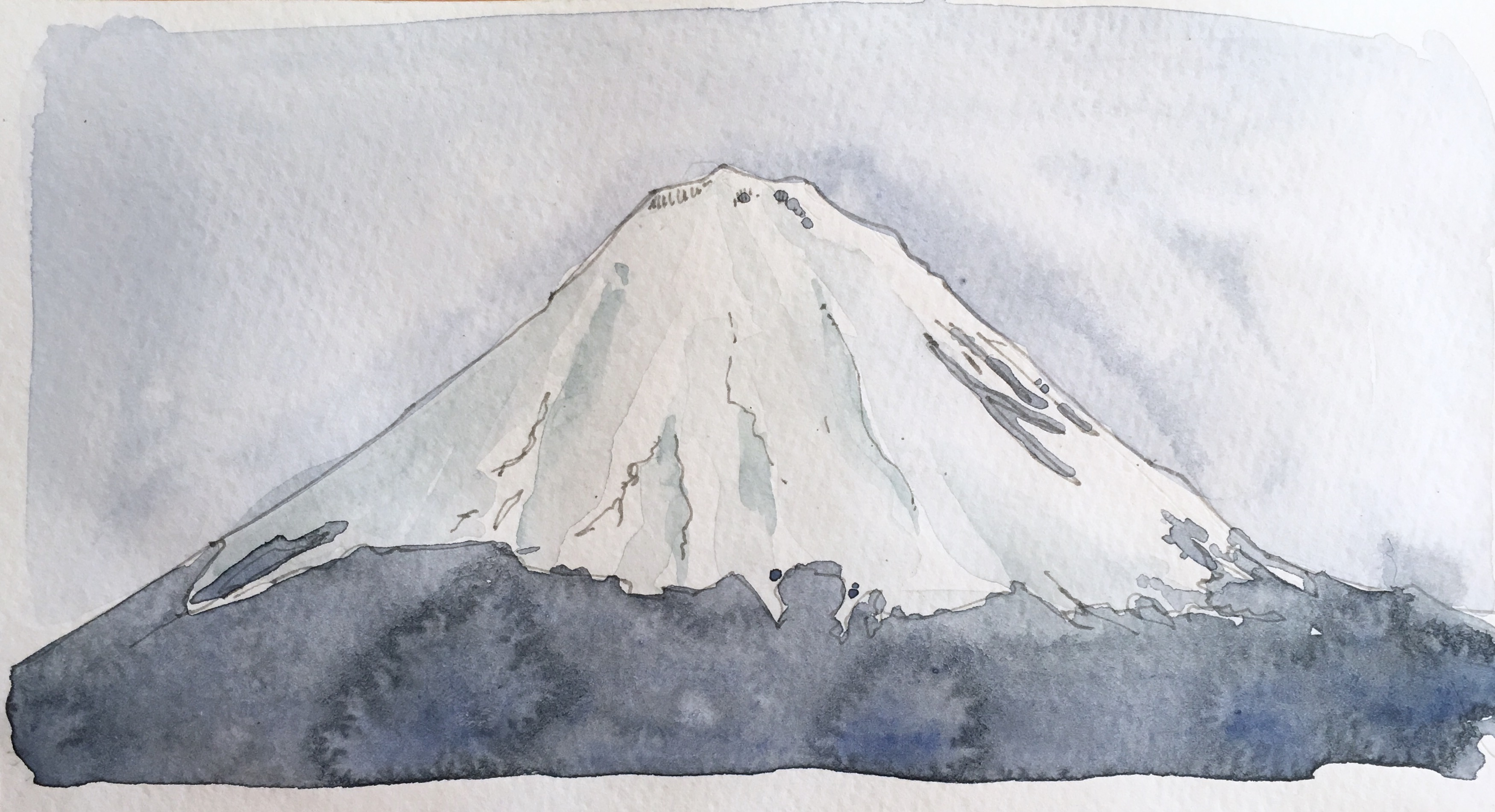 Today we reached the coastline. Our second stay in a traditional inn was easier (and well-lubricated with free sake) and we’re starting to get into more of a rhythm for riding. The density and terrain means we’re not moving as fast as we were in the US, but it helps that Japan is much more compact. Our next major destination will be Kyoto. 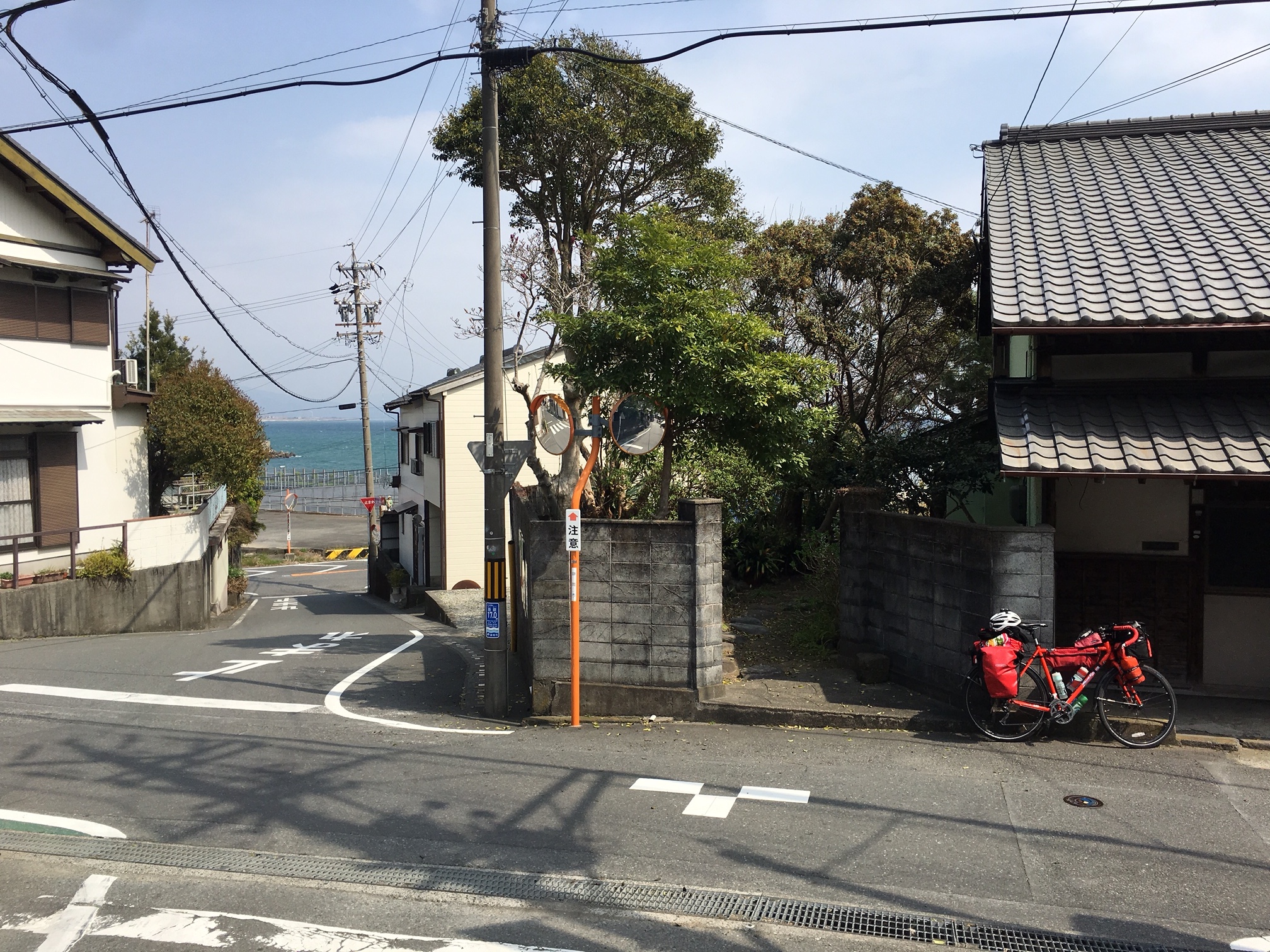 Like many nerdy people of my generation, when I was a teenager I was exposed to quite a significant amount of Japanese culture, mostly through anime and video games. Even though those hobbies have been supplanted by other interests, for years it has still been a dream of mine to come tour Japan. And now we have arrived here with our bicycles!

It is in many ways like I was expecting, but in others, more different. There are many things I recognize that have been exported to the West, but so much more that hasn’t been. 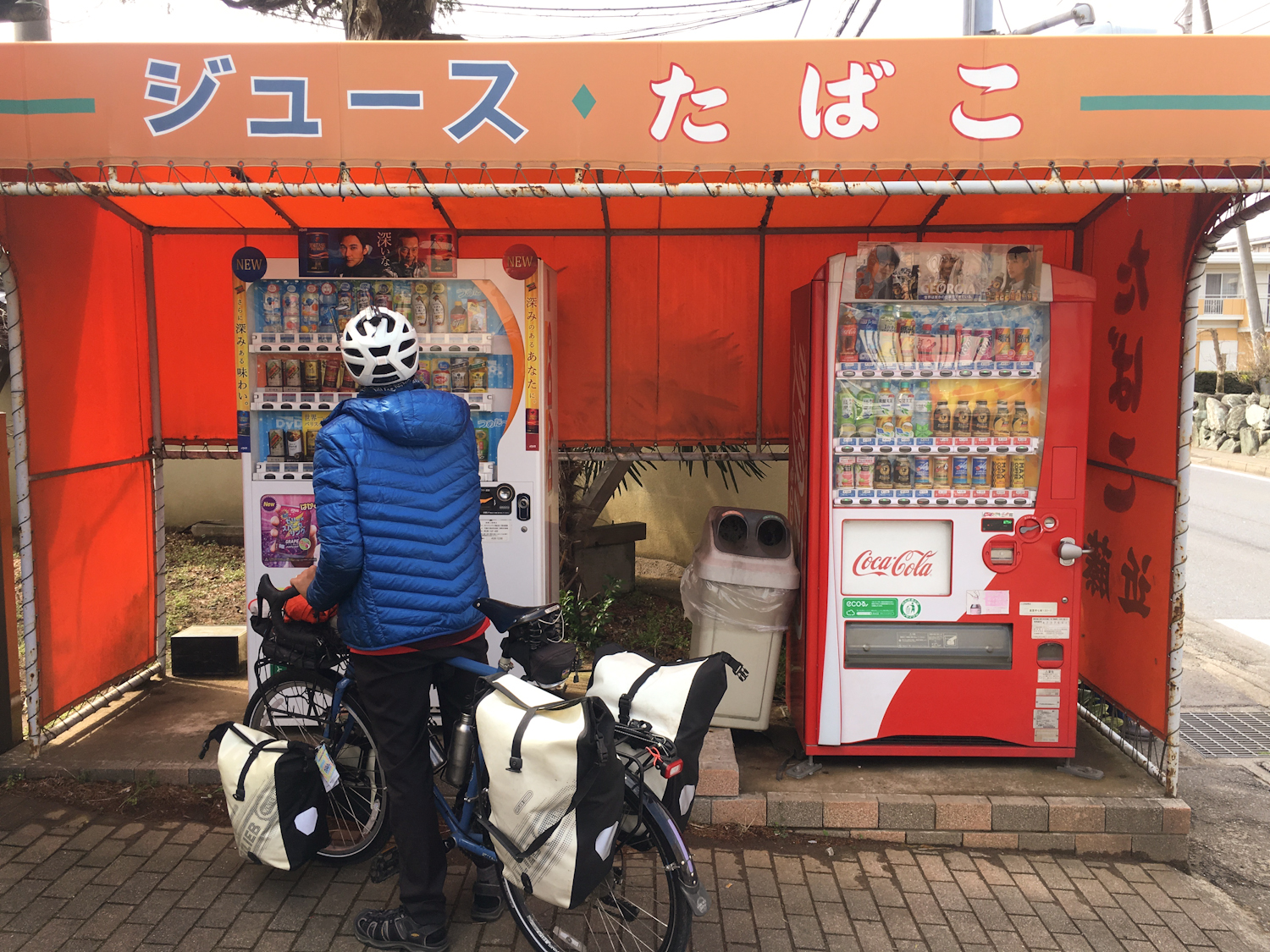 Japan is very orderly, and you are expected to behave in a certain way in order to maintain that level of order. I figured Japan might be like Germany, but the desire for order and cleanliness goes beyond that. This means that there are a lot of rules for us to follow – such as never bringing a bicycle indoors 🙂 I thought I was going to give the hotel attendant a heart attack when we wheeled our bicycles out through the airport hotel lobby after very carefully assembling them in our room. 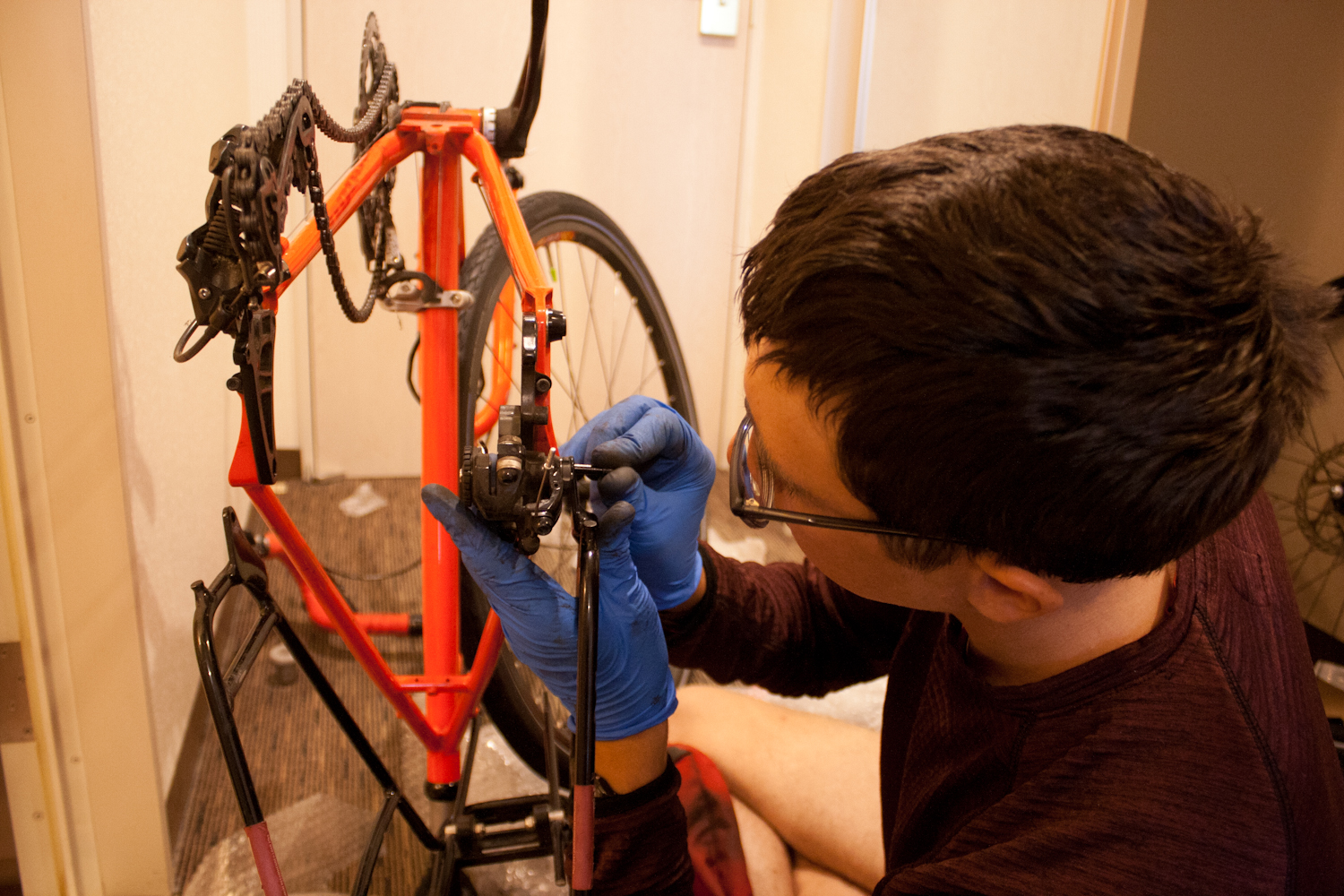 Having seen pictures on Google Street View around here, I was very concerned about the bicycling conditions. I had thought, “the roads are so narrow and hilly, it will be dangerous to bicycle through them.” I was envisioning something like the traffic conditions in Massachusetts, but way worse. So far that has not been the case. The roads are indeed narrow, many of them hilly, but the drivers are considerate, and are used to a much slower traffic speed. As a bicycle you have the option to be a pedestrian at any moment, and all of the streets have sidewalks. It is in many ways like the difference between Egypt and the United States. My guess is that the sidewalks are owned and maintained by the city or municipality here, unlike in America, where it is the property owner’s responsibility to build and maintain them. With the exception of making sure that we follow the rules, the whole feeling of traveling here is quite carefree. The police are helpful and not corrupt, no one is trying to overcharge or take advantage of us, and the streets, even in Tokyo, seem safe for bicycles, which everyone seems to use. 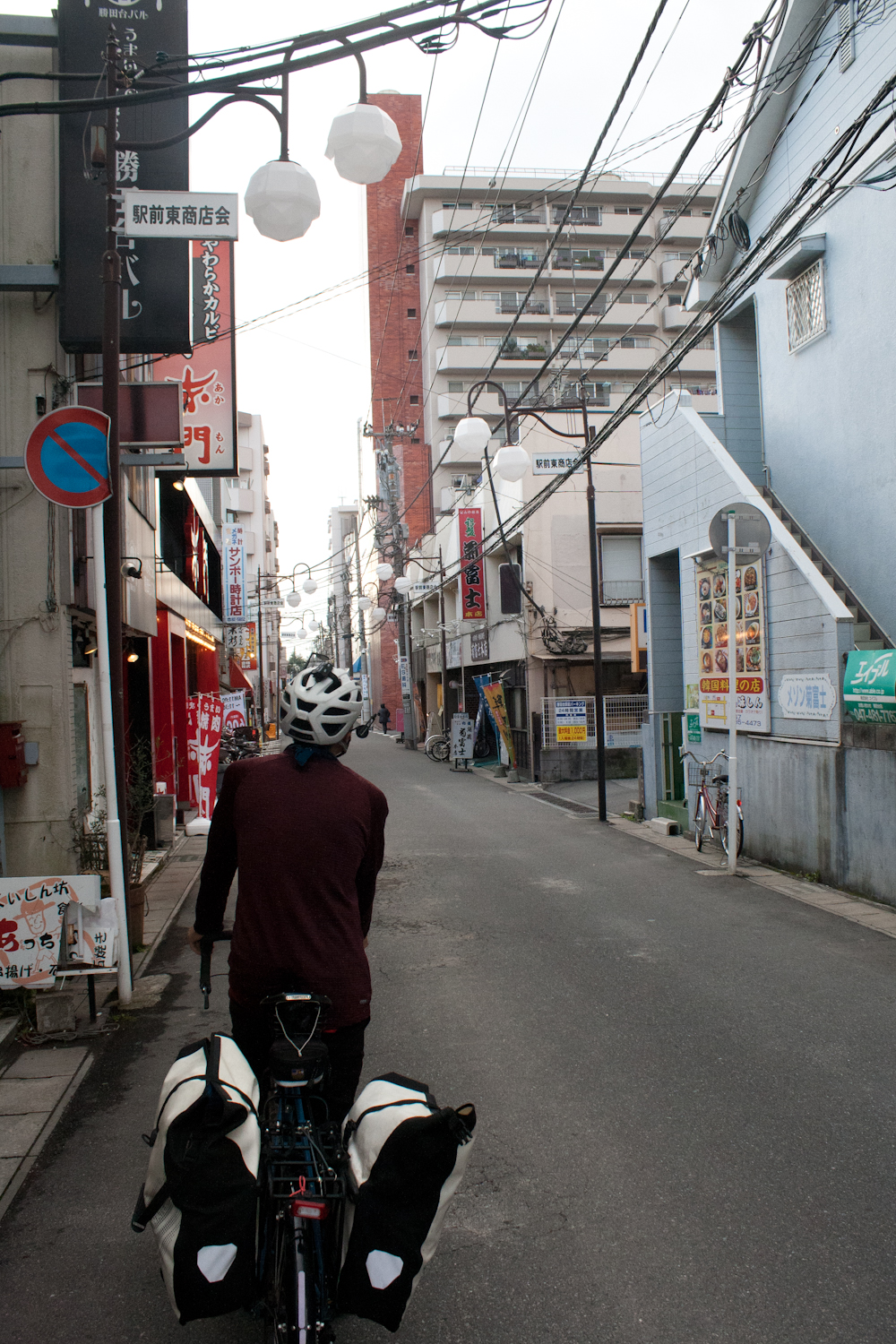 We picked the perfect time to come to Japan as well – there hasn’t been a drop of serious rain except for the evening after when we landed in Narita. The cherry blossoms are blooming, and it seems to be neither too warm to ride comfortably nor too cold to camp.   The food is inexpensive and delicious (about 50% of what I would expect to pay in America for a similar item), and the lodging is not quite as difficult to obtain as a I had thought.

We have spent the last few days seeing some of the tourist attractions in the greater Tokyo area. The blossoms (cherry or otherwise) are blooming – and all of the streets are lined with otherwise bare trees bearing puffy pink-white clouds of flowers. It is a pretty big deal here; Ueno park was packed with throngs of people taking pictures and setting up picnics on tarps and blankets. Ordinary people are walking the streets, taking pictures of particularly great trees. Supposedly the blossoms in Kyoto are more notable because the trees are older, but the ones we saw in Tokyo were still fantastic. 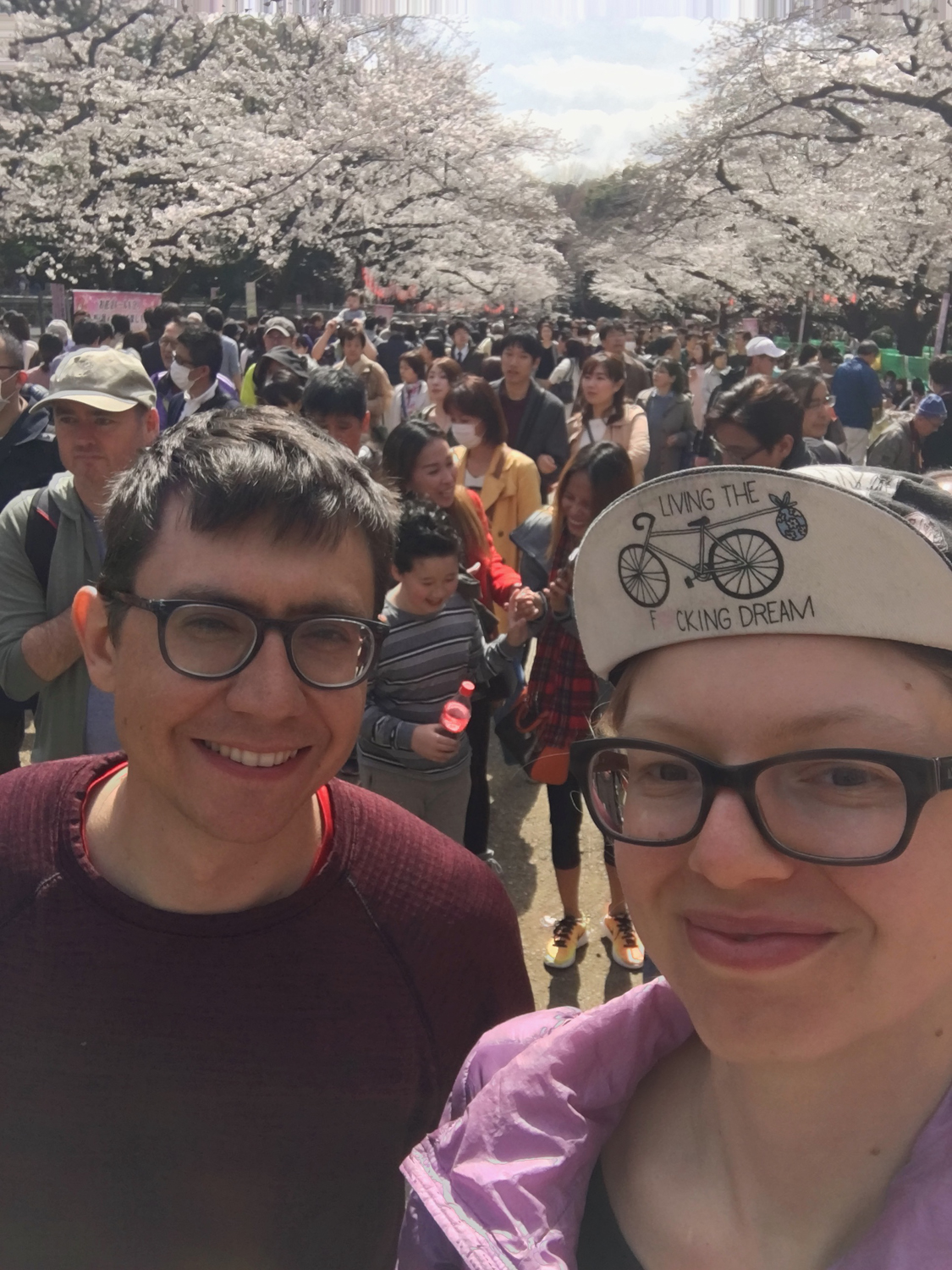 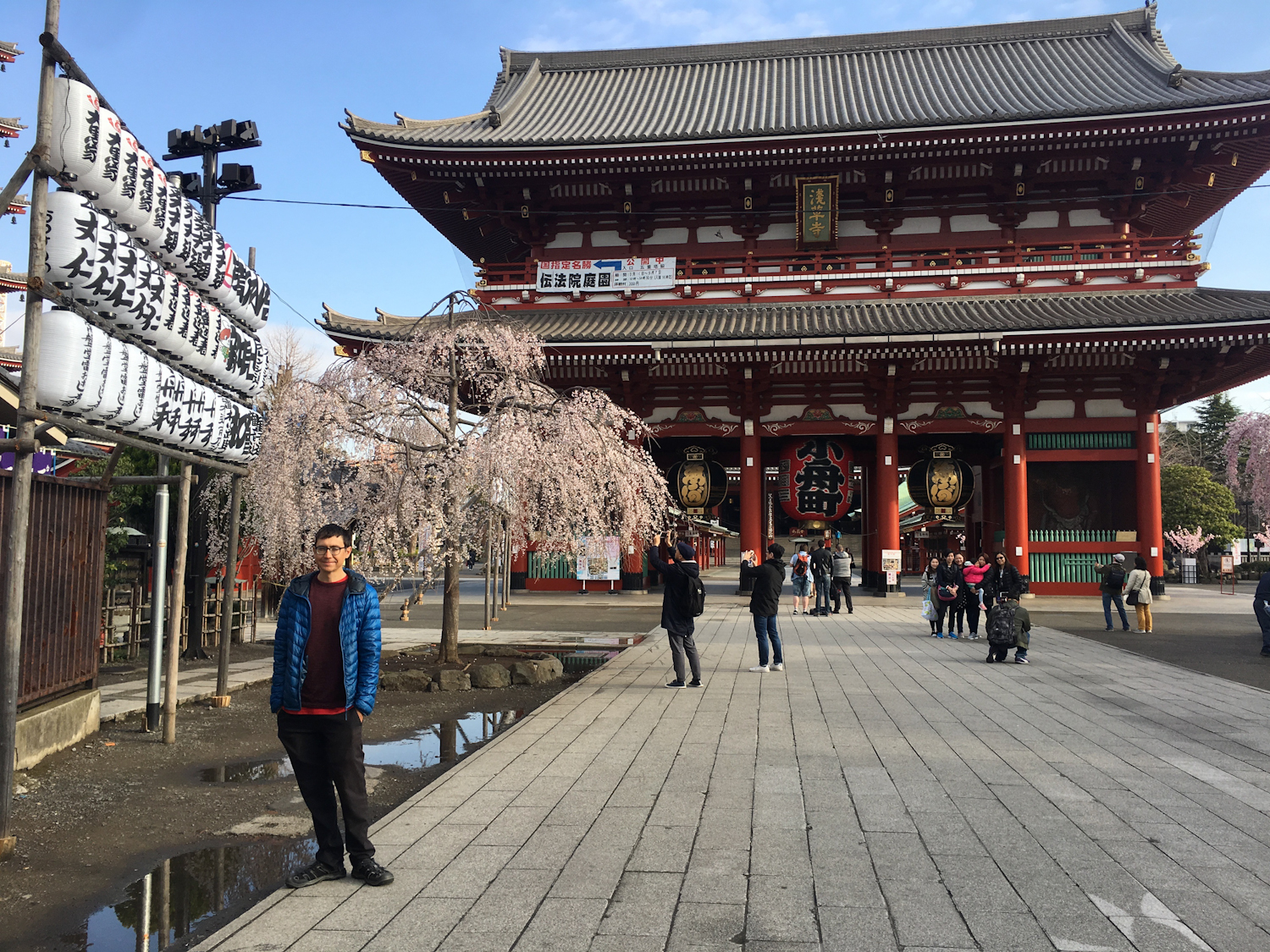 I’m glad I spent some time studying Kanji and Japanese vocabulary during he past few months, as it’s been invaluable for resolving new situations, but the communication situation is still very difficult. Asking where we can park our bicycle is an evening ritual in pantomiming. (Unlike in America, there are dedicated bicycle parking lots and spaces – and sometimes signs threatening to impound inappropriately-placed bikes.) Sometimes we get deadlocked where we want to communicate with someone but we don’t know what to say! Understanding responses is the most difficult part; our communication is largely one directional.

Japan seems like has a very 80s aesthetic. Much of the interior spaces have gently natural wood veneer trim. There are rounded edges everywhere. The predominant colors are brick and beige and light-grey and light-blue. There is soothing instrumental music being played everywhere, and a variety of street level buildings and tiny gardens or potted plants. The scale of many of the areas reminds of me of parts of the neighborhood in Cairo I spent my childhood in. 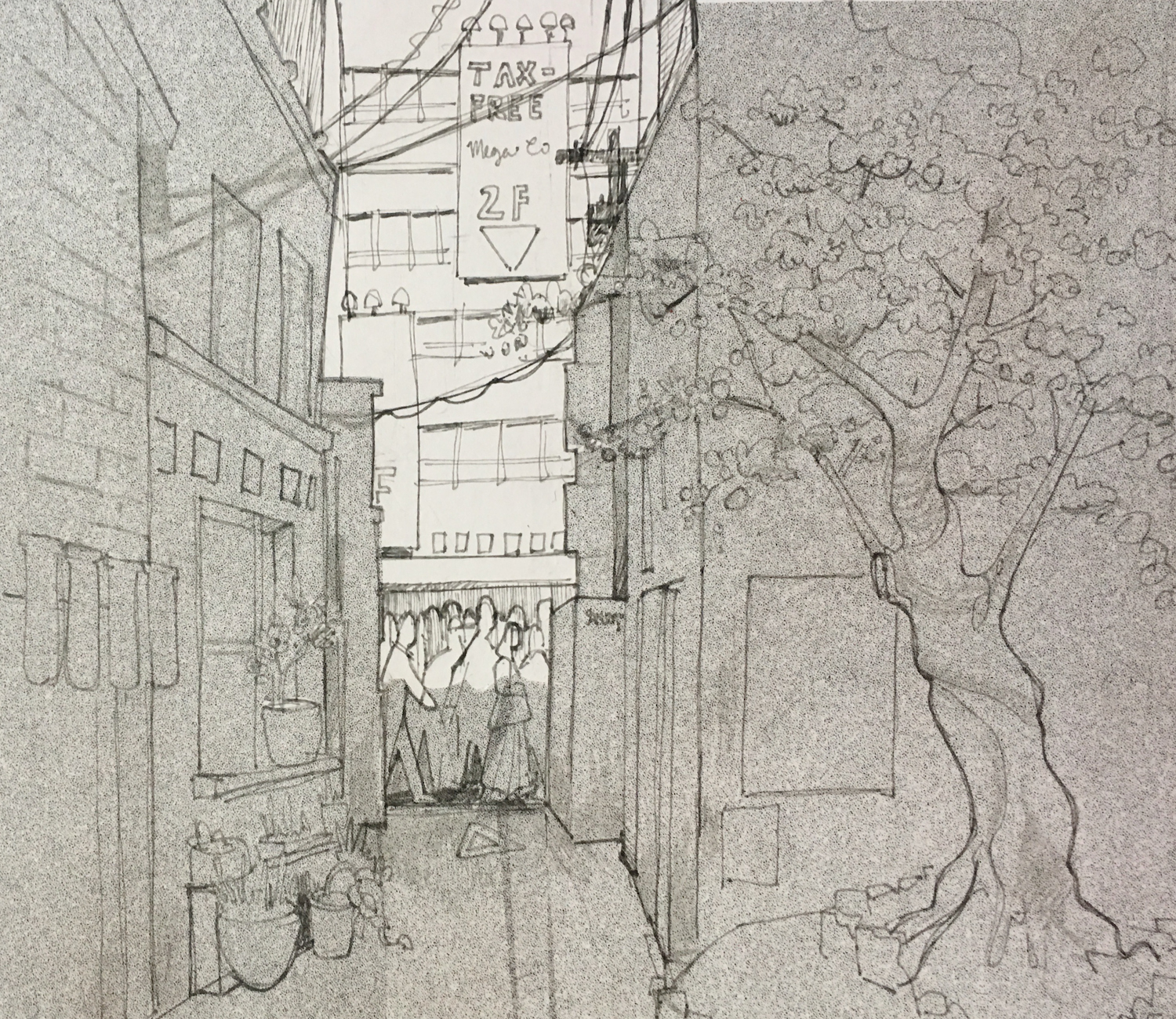 To borrow a phrase from Amy, we’re both “charmed as hell” with Japan so far. More to come later after we bike up our first mountain.

We spent the last several weeks on a Grand Pacific Coast Adventure: traveling from San Diego to Seattle by bike, train, and plane. This is post 4 of 4 about that trip.

Our final stop on the west coast was Seattle. We booked our plane tickets from Seattle to Tokyo, which gave us an excellent excuse to visit more of our friends in the Pacific Northwest. We spent a fun weekend with our friends Nic, Leah, Santiago and Krista, alternating between brunch, bars, and board games. It was a great break from preparing for our next trip!

We spent the last several weeks on a Grand Pacific Coast Adventure: traveling from San Diego to Seattle by bike, train, and plane. This is post 3 of 4 about that trip.

Feeling recuperated, we took the train from San Luis Obispo to San Jose. We thought it would be appropriate, given our backgrounds, to ride through Silicon Valley on our way up to San Francisco. I found the valley simultaneously under- and overwhelming: all these companies and power in one place, but that place just happens to be a cluster of suburban office parks! 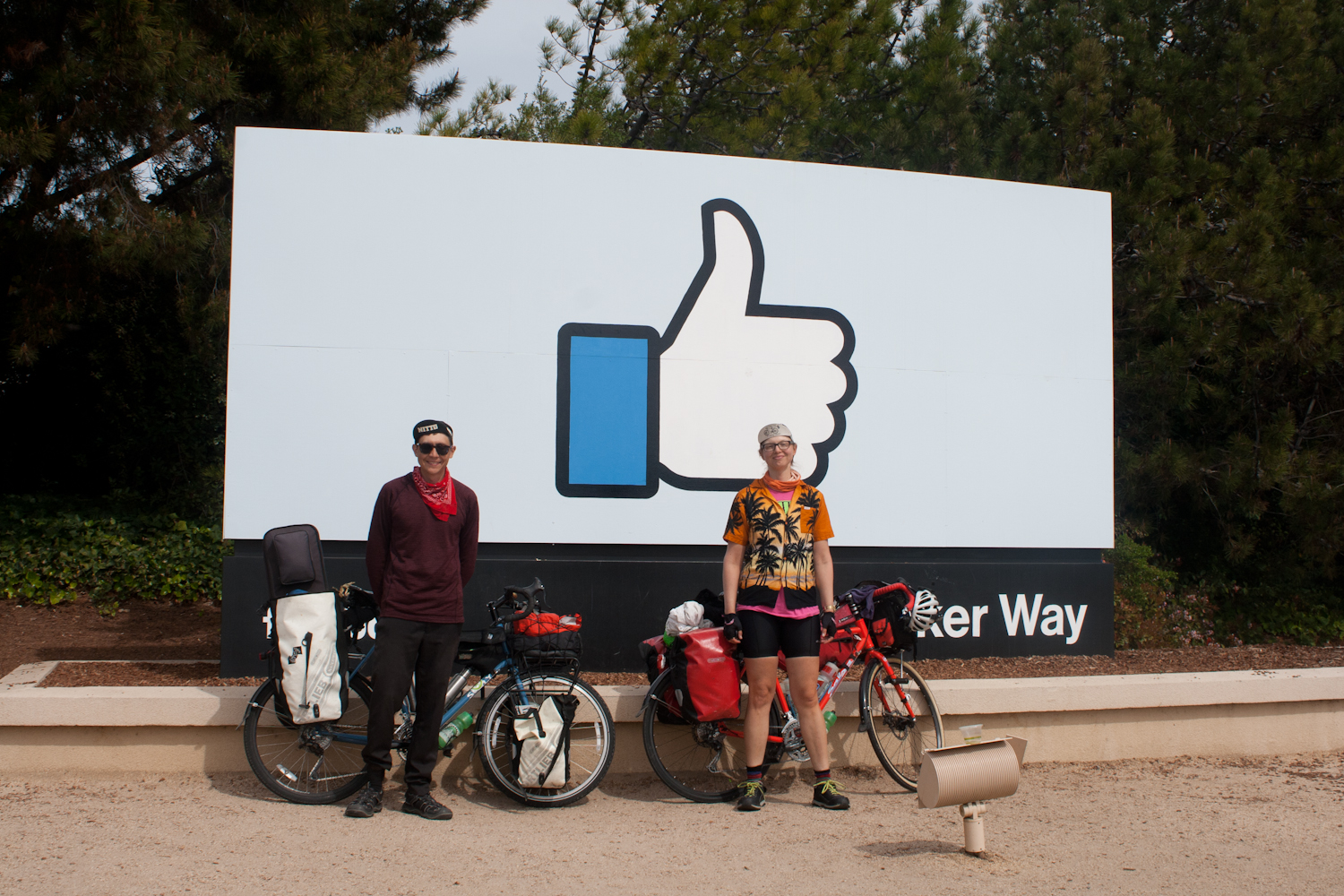 In San Francisco, we stayed with our college friend Katherine and her two roommates, Maggie and Buro. We spent that weekend catching up with Katherine, including taking a long, scenic ride through the city, and visiting many of our other friends who live in the area. Seeing so many people we knew, and staying put for a whole week, made me feel at home in San Francisco.

I’ve been thinking a lot about baking lately – a side effect of neglected hobbies and burning a whole lot of carbohydrates – so I signed up for a course at the San Francisco Baking Insitute. I spent the rest of the week on bakers’ hours, waking up early to make it to “bread school” by 7 AM. Every afternoon, I came home with an armload of bread to share with everyone. I had a blast scratching my baking itch, and using my mind and body in a completely different ways than usual.

We spent the last several weeks on a Grand Pacific Coast Adventure: traveling from San Diego to Seattle by bike, train, and plane. This is post 2 of 4 about that trip.

From Los Angeles, we took Amtrak to San Luis Obispo. We heard it was a relaxed college town and close to the beach, so we thought it would be a good place to spend a quiet week. We ended up spending most of our time there watching Netflix, instead of doing much beach-bumming or shopping, but it was just what we needed.

We spent the last several weeks on a Grand Pacific Coast Adventure: traveling from San Diego to Seattle by bike, train, and plane. This is post 1 of 4 about that trip.

We spent the first week of our Pacific Coast trip riding from San Diego to Los Angeles, along the scenic coastline of Southern California. That weekend, we visited my friend Meg, her husband Josh, and their preternaturally large cats in Santa Monica. We said we wanted to eat, drink and explore the city a little bit, and they delivered in spades: hitting a few major city highlights, stuffing our faces, and whiling away a few evenings with cocktails and music.