We were feeling indecisive in Aso, but our bicycles and our bodies made up our minds for us. Jim’s shifter cable was frayed almost completely through, and I had a backache that I couldn’t shake. We realized we needed a bike shop and a substantial break, so we coasted downhill to the city of Kumamoto, on the western coast of Kyushu.

Once we arrived in Kumamoto, we deliberately scheduled a day of nothing. We ate about five separate meals and watched Japanese TV while drinking Asahi in our hotel pajamas. 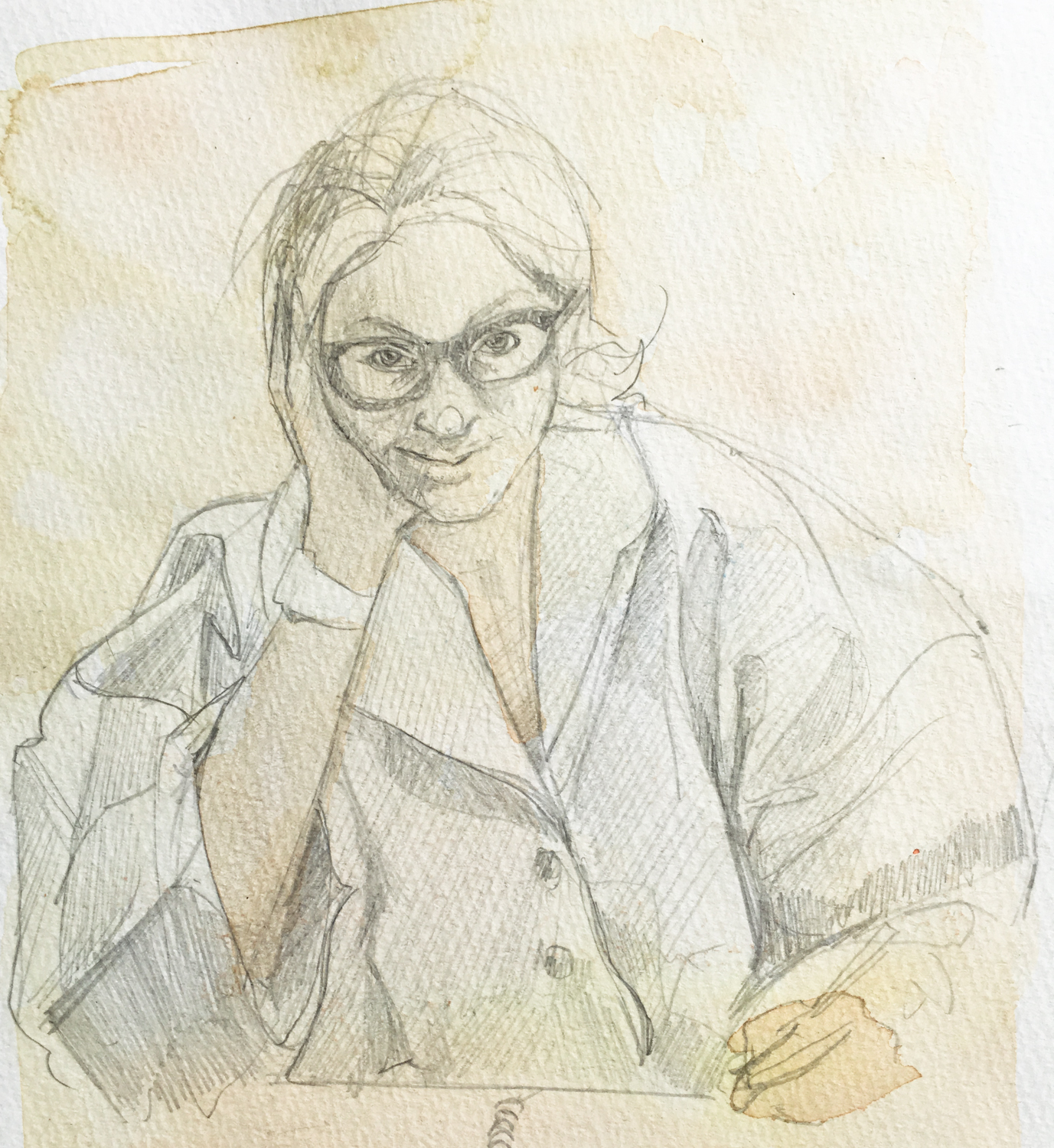 The second day, we ran errands. On the third day, feeling much more human, we actually ventured out to see the local sites. First was Kumamoto castle, still being rebuilt after the 2016 earthquake. The scale of both the destruction and the reconstruction were impressive. Huge walls of stone had toppled throughout the park, uprooting any trees downhill. The castle itself, under construction, loomed over the park. The modern scaffolding made it look like it was floating, only tenuously attached to the ground. 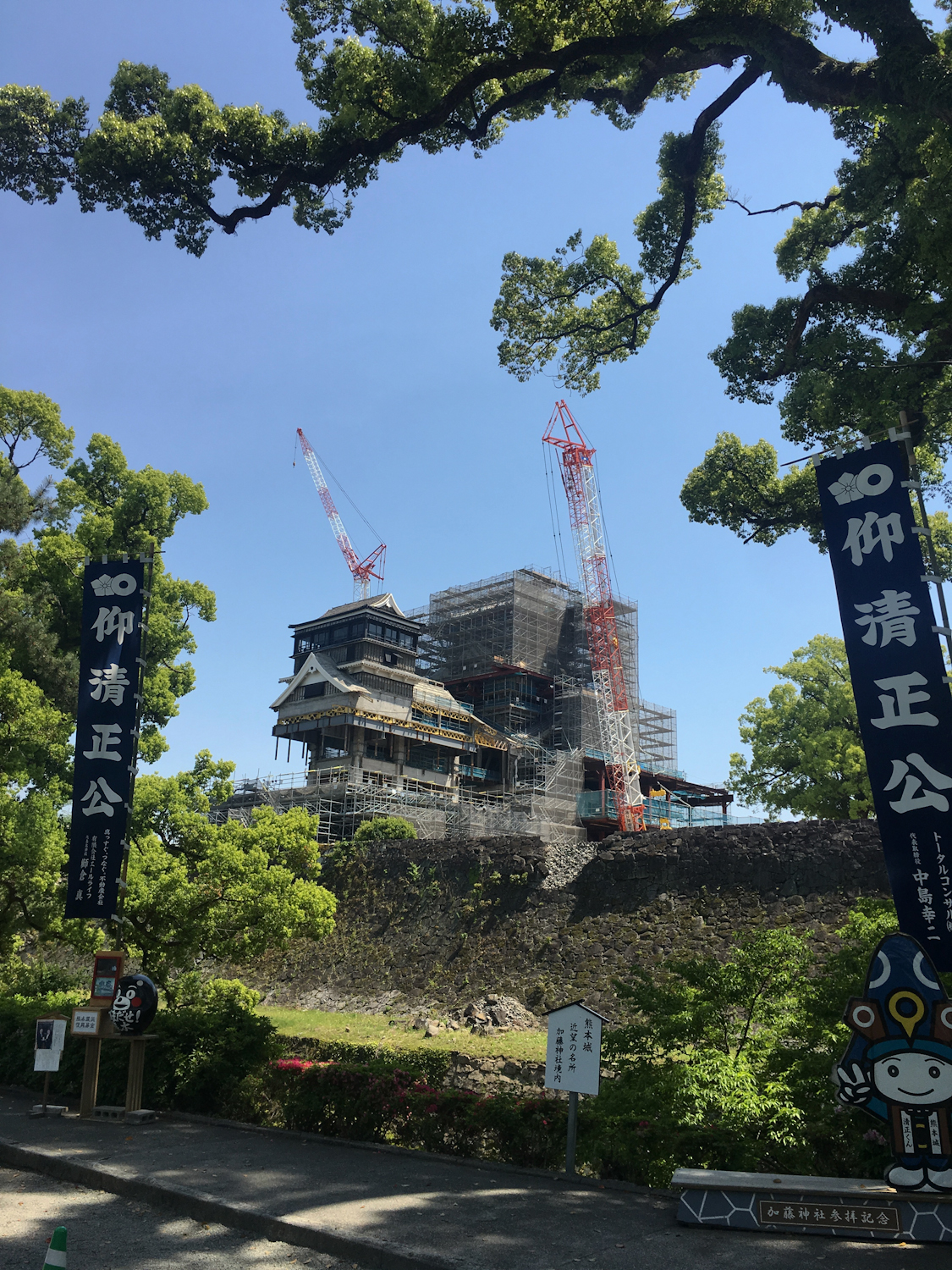 We also visited the Kumamoto Contemporary Art Museum. I had assumed it would be showing entirely Asian art, but I was surprised that the current exhibition was a series of watercolors by Andrew Wyeth. I loved his vibrant brush strokes and quiet Maine scenery, but it was displacing to see a diagram (in Japanese) explaining exactly where Massachusetts and Maine are.

The next day we rode north out of Kumamoto. We wanted to stay at Sky Tea House, a tea farm and hostel up in the mountains near Yame, since the touring family we met had recommended it. After a late start, we cruised through the flat valleys north of Kumamoto and quickly went up some rolling foothills. But it was almost dusk when we reached the steep final climb to the tea fields. The main road took a fairly indirect route, so we let Google suggest us a “shortcut”. It sent us on an a few believable roads before turning onto an abandoned forest road thick with leaf litter, and up the impossibly steep access paths beside terraced fields. It ended up being more of an 8 kilometer hike instead of a ride. It was still beautiful to see the tea fields and rice paddies, normally a fluorescent sort of green, in the black-and-gray of overcast moonlight.

We arrived at the tea house very late, but were welcomed warmly. (I’ve never been so happy to have someone say “help yourself” to a rice cooker). We spent two days there, with our sleeping bags set up on the house’s second level, an open tatami-lined space accessible by ladder. The next day was pouring buckets, like only Kyushu can. So we sat indoors, napped, read, and socialized with the other guests. It turned out to be the eclectic mix I’ve always wanted to find in a hostel – perhaps it’s a self-selecting group who end up at a rural tea farm up a mountain. There was Jiro, who traveled the world for 6 years before owning the farm; temporary farm workers; a neighbor and her teenage son, who was going to live at the farm for a while in lieu of school; an artist; a photographer; a French woman and skillful string musician, there for a month; an ex-telecoms engineer, also there long term; and an assortment of other friendly tourists and expats. We ate our fill of Japanese home cooking, and enjoyed a memorable guitar and violin jam session around a kotatsu. 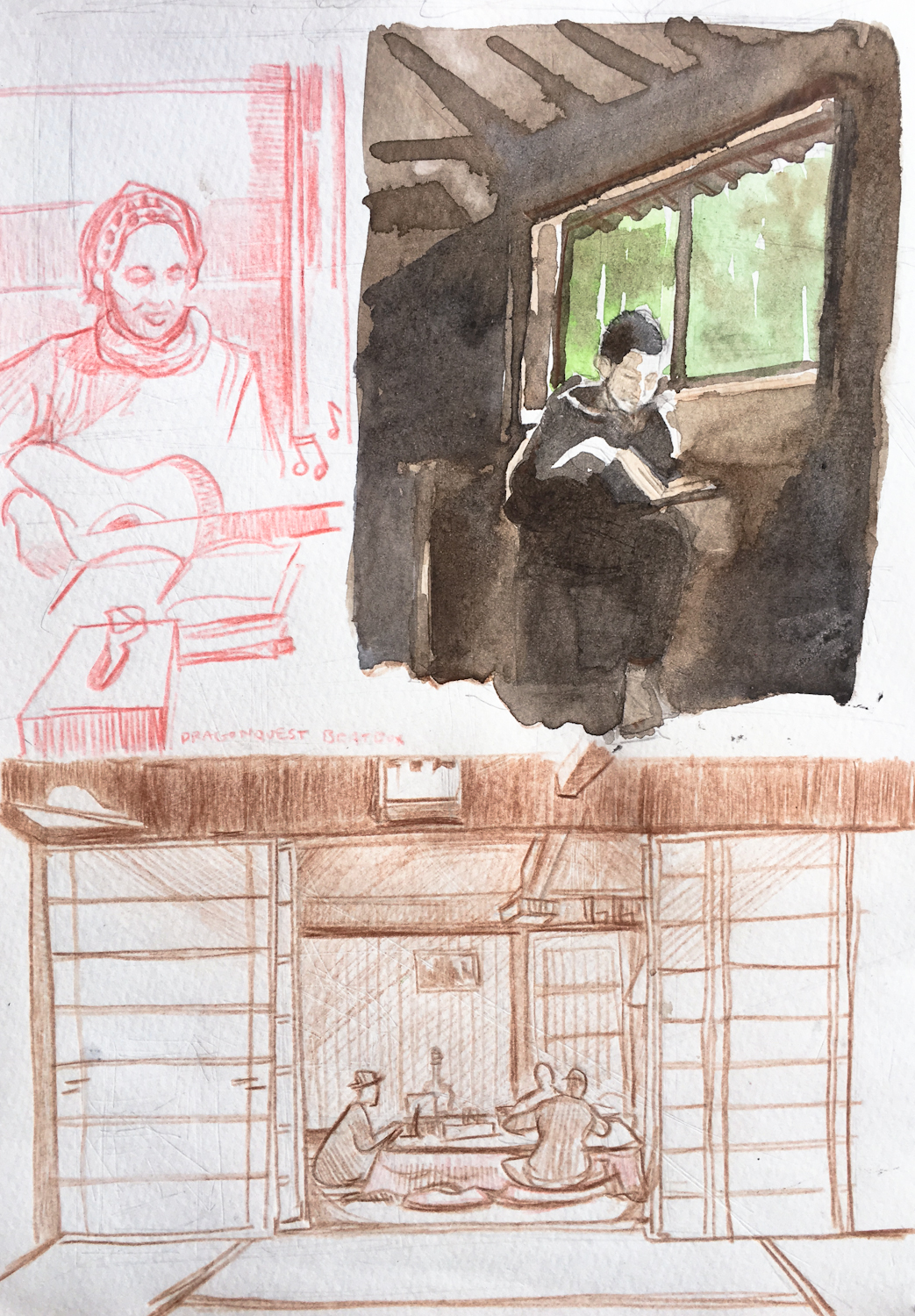 I felt happy to have found somewhere that felt so lively – it certainly made me think about different ways to build a community of people. We bid farewell to everyone at the tea house and went back downhill, this time to Kurume and onwards to Fukuoka. We felt like we had already had enough time in the city, so we spent only a single night and we skipped doing anything touristy. The next morning we continued up the coast back out of Fukuoka. 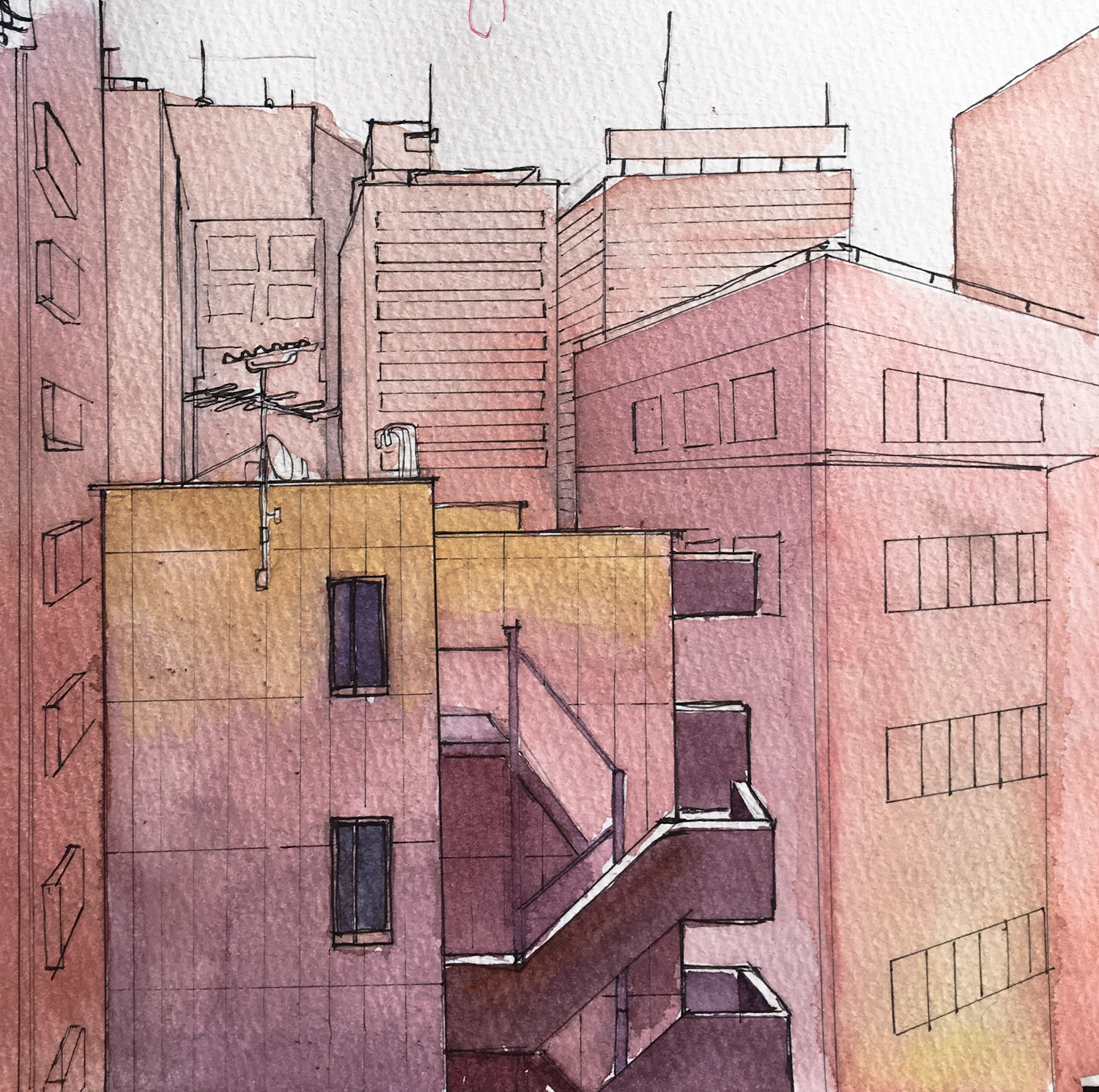 We’re now approaching the end of our time in Kyushu. It’s been so different from our ride between the urban corridor from Tokyo to Osaka. Kyushu felt magical in a way that few places have for us while touring. I was never bored by the scenery and I appreciated the intense physical challenge of it. I hope to come back some day, hopefully with more friends or family I can share it with. 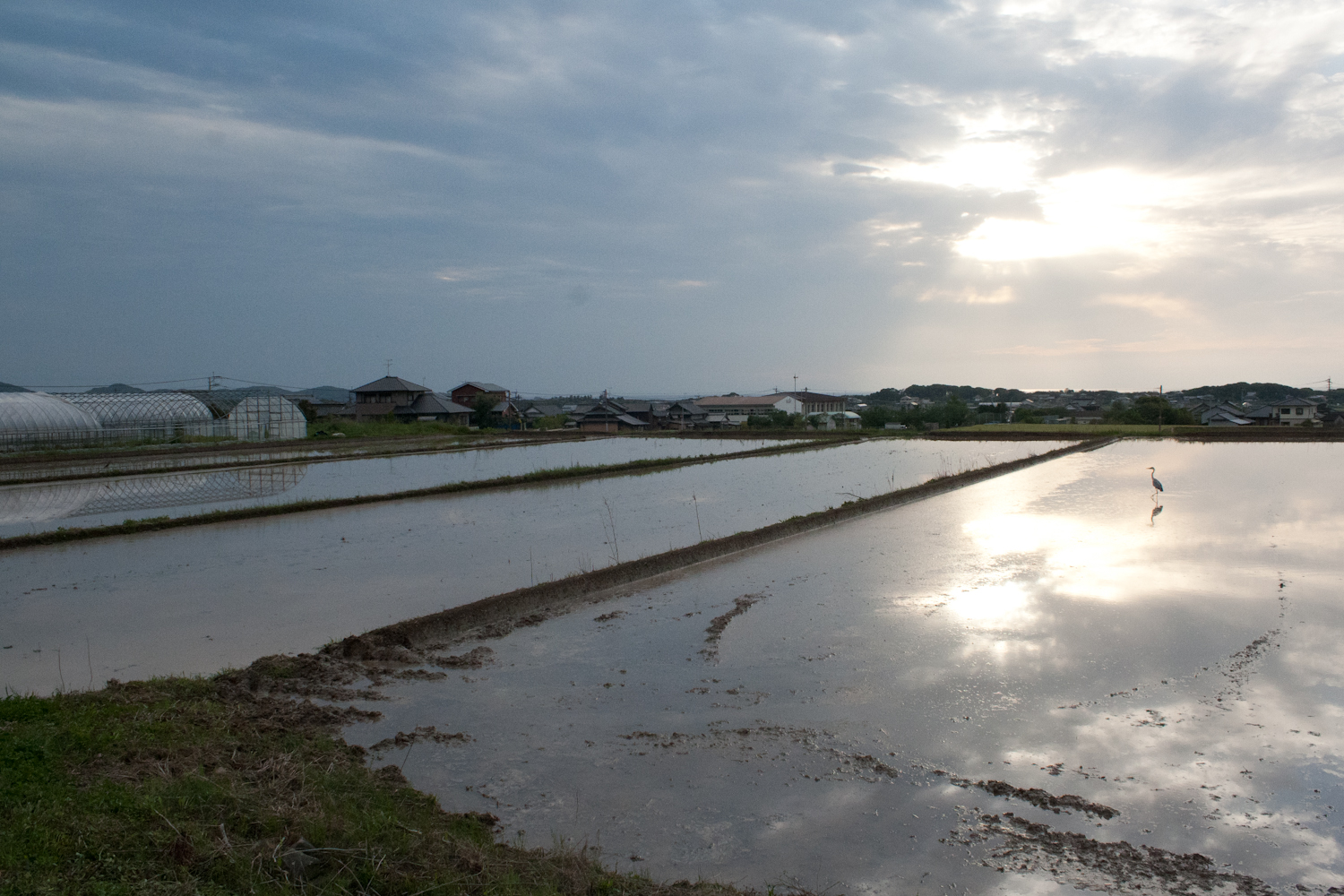 One Reply to “Urban Diversions”