Leaving Hiroshima, we followed the coast to the Seto Inland Sea. The city dropped off to fishing villages, with misty views to islands across the bay. We toured through three major sites we had hoped to see. First was Ōkunashima, also known as rabbit island – a tiny landmass populated with thousands of eerily tame rabbits. Then was the Shimanami bicycle road, a 70 kilometer route from Honshu to Shikoku, spanning seven islands with winding roads and long bridges. Finally, we took a ferry and circled Naoshima, a small island full of modern art museums and installations, kind of like a water-bound Marfa.

This was the end of what we had planned: with these tourist attractions checked off, we both felt a curious sensation of … fullness. Not quite homesickness or boredom, but more an overwhelming sense of not needing or wanting anything. It culminated as I sat on the stoop of a hostel in Takamatsu, unable to bear the twenty-minute check-in process. I wasn’t tired or hungry, and the weather was fine, so I didn’t want to stay anywhere.

We had two diverging plans at this point, and we were waffling between them. There was a ferry a day or two away in eastern Shikoku that we could take back to Tokyo, but we had nothing planned in Shikoku to kill the extra week of time. This is no fault of Shikoku’s. It has everything we would want – whirlpools; mountains; onsen; and pilgrims circling the island in white robes and straw hats. But that feeling of fullness extended to tourism, too; we weren’t excited about any of it. Our other plan was to bike back to Tokyo, but our original planned route was simply impossible in the time we had left.

At this point, we did the responsible thing, and headed to a bar. We resolved to stay awake until we wanted to, or were forced, to make a decision. After a few oddly-named cocktails, 7-11 ice cream cones, and a few hours wandering the city, we decided what we needed was to move on: so we headed to an Internet cafe near the ferry terminal, and decided to take the 1 AM ferry to Kobe.

The Internet cafe in Japan is more like a place where you pay to loiter. We were ushered into separate booths, each with a padded floor, and offered pillows if we chose to sleep. The cafe provided unlimited soda, coffee, and soft-serve ice cream, as well as a large library of manga, a karaoke bar, impeccably clean showers, and the fastest internet connection we’ve had in Japan. I was delighted that our indecisiveness had led us to such a perfect place to malinger. At 12:30, we rode off to the ferry, where we slept on the floor and arrived in Kobe at 5 AM.

We cycled east for two hours, in an increasing amount of rain, to get closer to Osaka. We checked ourselves into a second Internet cafe. In this one, we shared a “PC Gaming Room,” with a huge monitor and a couch. We both immediately fell asleep. When we woke up, we decided to figure out, once and for all, if we could actually make it back to Tokyo in time. With the giant monitor and fast internet, we plotted an itinerary, and our path forward became more clear. 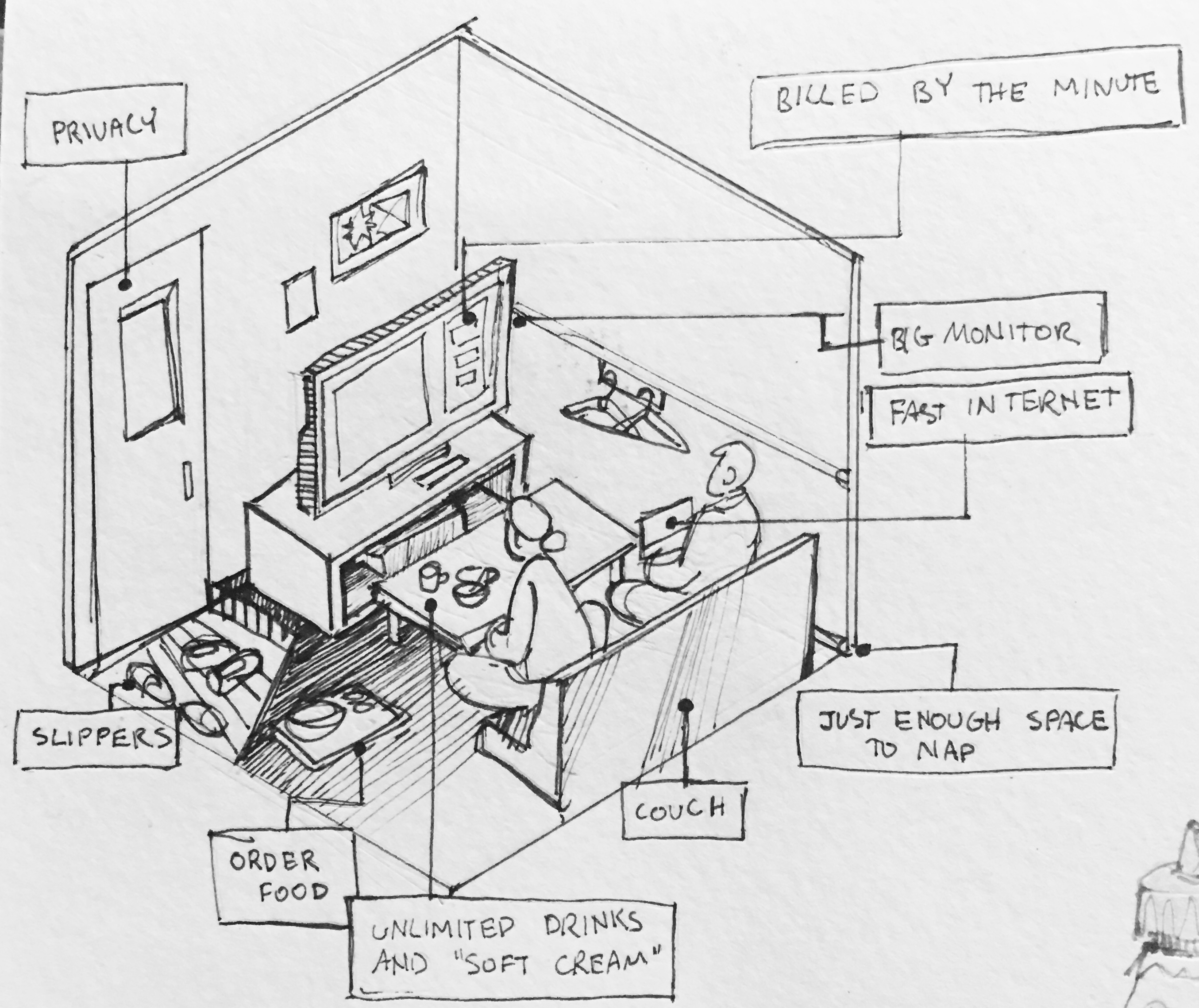 We’re biking north and east, and should have a satisfying week of hard riding to make it back to Tokyo.

I feel relieved to have a sense of purpose in this last segment of our trip. After two months of wandering, it feels good to trade that in for the simpler discomforts of biking hard.

One Reply to “Shikoku, the inland sea, and a purpose”